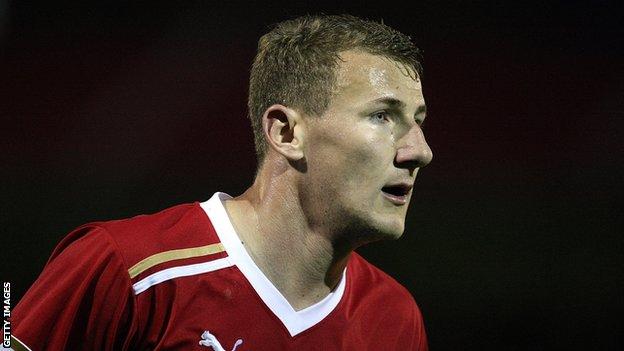 The Robins are among a number of sides interested in the 25-year-old.

Low told BBC Sussex: "Despite rumours that are going around, we haven't agreed a deal yet.

"We have had a lot of interest in him from a few clubs, and Bristol [City] have been the most aggressive. At the moment we are quite a way off."

We are not a massively rich club so if it was the right sort of offer we would definitely let Kyle go, if that's what he wanted

He added: "It would appear they are more keen on him than anyone else.

"I had a verbal discussion with their chief executive on Saturday and I thought we might get somewhere, but I have had nothing in writing since."

McFadzean, who joined Crawley from Alfreton Town in August 2010, has not played since November due to a virus.

"I'm pretty sure Kyle hasn't agreed personal terms or even had a medical, which is one of the key factors in this," Low continued.

"He has been injured - our physio is adamant that he is two or three weeks away from being fit.

"The reports we have done have cleared him and he is working hard in the gym and feeling good."

McFadzean has been a central part of the West Sussex club's rise from non-league to League One over the past two seasons, making 91 league appearances, and Low says they would love to keep him at the Broadfield Stadium.

"I hope Kyle doesn't mind me saying this but we like him as a player and a person.

"He likes us as a club. He is ambitious but it is a nice position for us to be in.

"He is a fans' favourite and we've got him under contract."

Bristol City have stepped up their interest in McFadzean following the appointment of former Reds boss Sean O'Driscoll as manager.

Low says that due to their financial position and the desire of manager Riche Barker to strengthen his squad, they would be prepared to let McFadzean leave.

"It would have to be the right club and the right money for him to move," Low added.

"We are not a massively rich club so if it was the right sort of offer we would definitely let him go, if that's what he wanted.

"If someone really wants him they will have to pay his proper value."