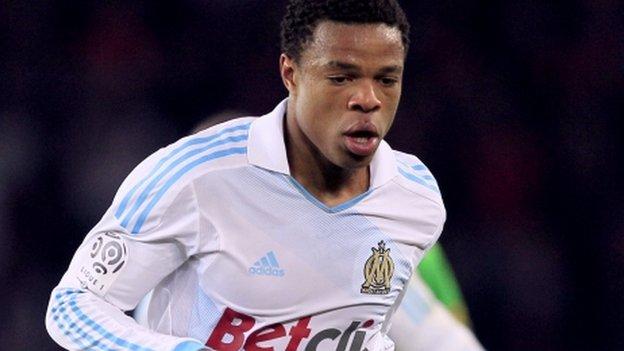 Marseille striker Remy, 26, was due to sign for Newcastle but is set to join QPR for £8m, while Rennes midfielder M'Vila, 22, is expected to cost £7m.

Redknapp said he was delighted to be signing players he has coveted before.

"Remy has had a medical today, so that's all sorted," Redknapp said. "M'Vila, I think we're very close."

Remy's future was thrown into doubt after he was diagnosed with a heart condition before moving from Nice to Marseille in August 2010.

Following consultations with three cardiologists, Marseille's chief medical officer said that the player's problem would "not prevent him from doing his job".

"We made an offer, but it was turned down, you have a right to make an offer. He's a good player."

Redknapp's team beat West Brom 1-0 to reach the FA Cup fourth round and maintain their unbeaten start to 2013.

And afterwards the QPR manager said Remy had pedigree to succeed in the Premier League, despite QPR sitting at the bottom of the table.

Rangers beat Newcastle to Remy after offering him a more lucrative contract, understood to be more than £70,000 per week.

"Remy is a good player," he added. "Newcastle do very well in the French market as well with Graham Carr their chief scout, and he is a boy I looked at an awful lot while I was at Tottenham.

"Last year we were talking about paying £20m for him. We looked at him, we liked him and we were chasing him but didn't quite get him.

"I went to see him at Marseille last week and he wasn't keen but the chairman Tony Fernandes worked ever so hard. He wouldn't give up and the boy decided to come.

"He's quick, a French international, his movement is excellent and he has the potential to be a real star in the Premier League."

France international M'Vila is currently banned from international duty until June 2014 after he and four team-mates broke a curfew before a key game with the Under-21 side.

But Redknapp said he had no qualms about the highly sought-after player.

"He played against England a couple of years ago for France, and was fantastic," Redknapp said.

"Rennes turned down £28m from an English club for him a year ago. Spurs offered £15m for him in August. The deal looks OK.

"M'Vila's had a few off-the-field problems. If he behaves himself, and plays as we know he can, he'll do well."

"The type of money hopefully we can pull off two deals for is fantastic."