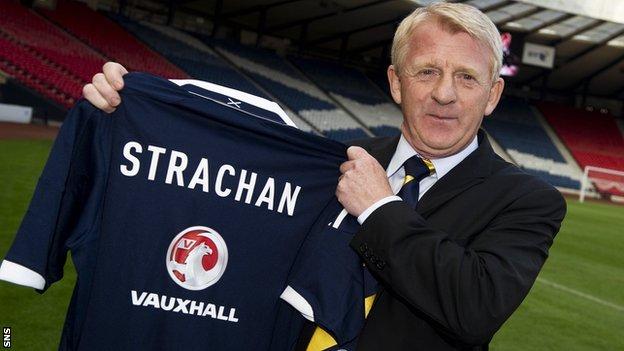 Gordon Strachan has been confirmed as the new manager of Scotland.

The former Celtic and Middlesbrough boss replaces Craig Levein, who was sacked in November.

Strachan has signed a contract that will cover the remainder of the current World Cup qualifying campaign and the Euro 2016 qualifiers.

"I'm very proud but also my family are proud. The time is right for me to be able to take a job like this," he said after his appointment was announced.

"There'll be rough times but I hope there'll be good times too.

"Every club you go to there's always challenges but this is the first time the challenge is on behalf of a nation.

"If you can be successful you can make a nation happy and make a nation proud and that is the priority for me to be able to do that with help from other people.

The 55-year-old has been out of management since leaving Boro in October 2010.

After playing spells at Dundee, Aberdeen, Manchester United, Leeds United and Coventry City, the winger moved into management with the Sky Blues in November 1996.

After keeping Coventry in the Premier League for several seasons, they suffered relegation at the end of season 2000-01 and Strachan departed a few games into the following season.

He returned to the dugout when Southampton brought him in to replace Stuart Gray and the appointment helped Saints stave off relegation before they reached the FA Cup final in 2003.

But Strachan left the club the following year and took a break from football.

His move to Celtic in June 2005 followed Martin O'Neill's decision to leave Glasgow.

Strachan recovered from a 5-0 Champions League qualifying defeat by Artmedia Bratislava in his opening match - a tie that finished 5-4 on aggregate - to win the Scottish Premier League title three years in succession.

He also led the side to two appearances in the last 16 of the Champions League, the club having never reached the knock-out stages prior to Strachan's arrival.

However, Rangers won the SPL in 2009 and Strachan left Glasgow shortly after.

A year in charge of Boro followed but, after missing out on promotion in 2010, a poor start to the season led to Strachan leaving the club by mutual consent.

Levein's three-year spell in charge of Scotland came to an end after a poor start to the 2014 World Cup qualifying campaign.

Having missed out on qualification to Euro 2012, the Scots began their pursuit of a place in next year's finals in Brazil with successive home draws against Serbia and Macedonia.

Scotland then lost from a winning position in Wales before defeat in Belgium consigned Levein's side to the bottom of their group.

After Levein was sacked, Scotland Under-21 coach Billy Stark was placed in caretaker charge of the senior team for the friendly win in Luxembourg.

Strachan's first match in charge will be the February friendly against Estonia at Pittodrie Stadium, the venue where he enjoyed success as an Aberdeen player.

"I really want the squad and the staff to give something back to the country and the fans who support us because the fans are probably more famous than the squad now," Strachan added.

"So what we want to try and do is to give back something and make them turn up for a major finals competition.

"If we work together as a group and a set of fans I know for a fact we'll be successful.

"What I know is that these guys, for all they might get criticised, are the best at what they do.

"They play for Scotland and we have to find a system that suits these players to win games of football."