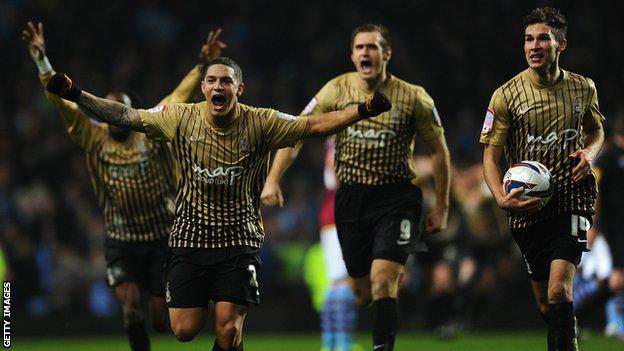 Bradford became the first fourth-tier side in over 50 years to reach the League Cup final as they secured a 4-3 aggregate victory over Aston Villa.

The Bantams bridged the gap between the bottom division of English league football and the Premier League to secure a place at Wembley, despite a 2-1 second-leg defeat.

Another chapter will now be written in one of the most remarkable football stories of recent times as Phil Parkinson's League Two side will face either Swansea City or Chelsea on 24 February.

Bradford may have lost on the night but they stubbornly protected a 3-1 first-leg advantage to emulate a feat last achieved by Rochdale in 1962.

Christian Benteke's first-half goal was just reward for Villa's undoubted superiority but Bradford managed to survive without further damage until half-time, before scoring the goal that takes them to Wembley for the first time since 1996.

James Hanson, the striker who used to stack shelves in a supermarket, flashed a superb header past Shay Given from Gary Jones's corner 10 minutes after the break.

The Bantams could have wrapped up matters earlier as Hanson missed an open goal and substitute Garry Thompson hit the woodwork - before Andreas Weimann set up a nerve-shredding four minutes of stoppage time with a late goal for Villa.

It was their winner on the night but nothing could stop an explosion of joy in the top tier of Villa Park's North Stand when referee Phil Dowd blew the final whistle that sent Bradford City to Wembley.

Villa may have won this game but there was nothing in the way of solace for the home side's fans as they turned furiously on manager Paul Lambert and his players at the final whistle.

Bradford's players and staff celebrated in front of their ecstatic fans, who have now seen their side beat Premier League opposition in Wigan Athletic, Arsenal and Villa on the way to Wembley.

In an era when prizes so often go to clubs with the biggest budgets, Bradford's progress to a major cup final - having last won one when they claimed the FA Cup in 1911 - provides a gloriously unpredictable sub-plot to the season.

Bradford would have been braced for an early assault from Villa as they tried to cut the deficit - and so it proved as they struggled to control the physical presence and aerial threat of Benteke, who headed straight at Bradford keeper Matt Duke when he should have done better.

"Bradford dared to dream. They were helped by Villa, who were very naive in the second half, but don't take anything away from the Bantams. They played very good football and were brilliant at set-pieces. My words aren't good enough for them. As for Villa, there will be questions about Paul Lambert's future, but Randy Lerner understands the job he is doing."

Duke saved from Gabriel Agbonlahor on the turn before Benteke finally made the breakthrough after 24 minutes. He made a difficult finish look easy as he flicked Joe Bennett's cross high past Duke.

The goalkeeper distinguished himself with two more saves from Charles N'Zogbia and Stephen Ireland, Bradford's only response a curling 20-yard effort from Nahki Wells that flew wide.

For all their toils of the first half, Bradford were still protecting a precious advantage at the start of the second half. They were soon to extend it over the two ties.

Bradford had preyed on Villa's inability to defend set pieces, corners in particular, in their first-leg win and took advantage of the weakness again as Hanson equalised to restore their two-goal aggregate lead.

Ron Vlaar's presence was supposed to help cure Villa's Achilles heel but he lost Hanson at Gary Jones's corner, allowing the striker to power a header past Shay Given.

As Villa reeled from the blow, Hanson wasted a wonderful chance to push Bradford even closer to Wembley when he misjudged a header from six yards out after Nathan Doyle's cross.

Bradford, growing in confidence with Wembley coming into view, came even closer with 18 minutes left when substitute Thompson connected crisply with his first touch, only to see it bounce back off the bar with Given beaten.

Weimann's goal gave Villa hope, but their second-half performance was that of a team drained of belief and confidence - and Bradford had defied the odds and logic once more.