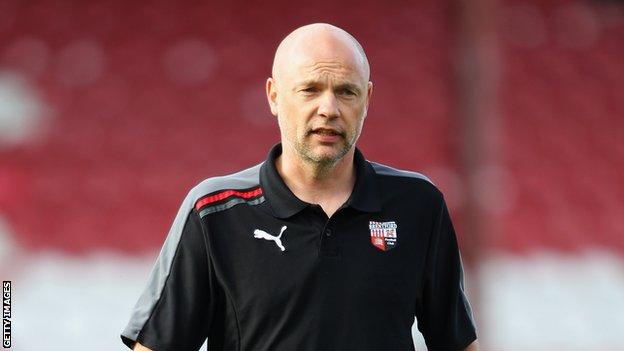 Brentford manager Uwe Rosler says he will strive to keep the club progressing after signing a new contract with the west London club.

Last week Rosler extended his stay at Griffin Park until the summer of 2015.

He told BBC London 94.9: "The club spoke to me and I was always interested. I like it here as there are lots of positive and good people around me.

"We started something exciting 18 months ago and the club has progressed a lot. I just want to be part of something successful."

Rosler's contract with the League One side had been due to expire this summer.

"The club were interested to tie me up and I think it's important when you're planning for the next season, regarding bringing new players in or re-signing players, that the players know who will be in charge," he added.

Rosler, who spent four years playing for Manchester City in the mid-1990s, joined the Bees in June 2011 after starting his managerial career in Norway.

Last season the Bees finished ninth in the table but this season they are in the hunt for promotion to the Championship.

With progress off the pitch as well, including the club buying land for a new 15,000-seater stadium, the decision to extend his contract was a simple one for Rosler.

It definitely helped that I played six years in English football and know the culture. I loved the English way of playing, the intensity of the game and the connection you had with the fans

"The training ground, the squad and the type of football we play has totally changed," the German said.

"We have assets in our first team squad that other clubs are looking to pinch away from us.

"We have talented young players who, hopefully, we can build a future around.

"Everybody at the club buys in to what we want to achieve.

"It started with the owner [Matthew Benham] and the board, who are very supportive.

"The budget has not changed in the last three and a half years but we've restructured it and our squad is much smaller.

"Quality-wise, it has moved on.

"We have a quality backroom staff in place and that allows us to have a smaller number of players."

Rosler was forced to retire from playing in 2003 while on the books at Lillestrom, after a cancerous tumour was discovered in his chest.

He began his managerial career with the Norwegian side two years later and went on to take charge of Viking and Molde.

And Rosler says he has relished the opportunity to manage in England and in League One.

"It is a tough environment and you don't get many chances," he said.

"You have to hit the ground running straight away. There is not much room for forgiveness.

"It is difficult but also challenging.

"For me, the environment I am working in, in English football, is one I always wanted.

"In terms of coaching and managing players there is not a massive difference [to Norway].

"But in terms of intensity, the amount of games and the physicality in the games, compared to Scandinavia there is a massive difference.

"Every three days there is a game and you have to have more players available and keep everybody on their toes.

"Each country has their own culture and you have to adapt your methods and your way as a manager depending on the club and country."

Rosler says his spell with Man City, where he scored 65 goals in 167 appearances, and further time in England with Southampton, helped him adapt when he took charge at Brentford.

"It definitely helped that I played six years in English football and know the culture," he said.

"I loved the English way of playing.

"I loved the intensity of the game and the connection you had with the fans.

"I always felt it was an advantage to know the mentality of English players. It is important you have a social intelligence as a manager.

"What you can do in Norway you probably can't do in England and vice versa."

Rosler says that he has benefitted from a close working relationship with Brentford's sporting director Mark Warburton since taking charge at Griffin Park.

"You have different names in English football for that [role]," Rosler said.

"Football has moved on and is far too complex now with contracts, agents and the number of staff in the club; academies, backroom staff, administration and the stadium

"It is important you have qualified people for each department who can concentrate on their own jobs.

"For us in the football department, my relationship with Mark was a crucial factor in signing a new contract and that we continue the work we have started.

"I am dealing with very honest people who are trying to support me and Mark in every way and find more financial resources to make us more competitive.

"The club is definitely trying to improve the income.

"We rely on Matthew Benham but everyone is driven to give the first team the best possible conditions."