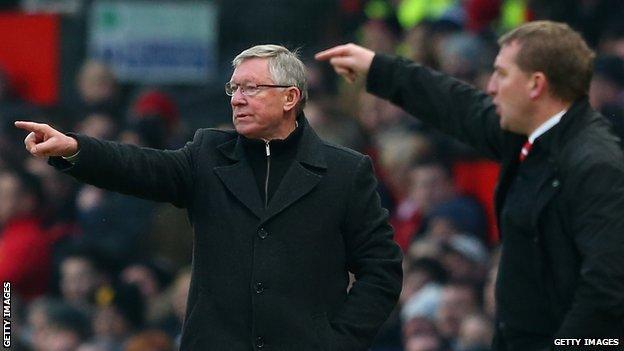 Sir Alex Ferguson's pre-match jab in Liverpool's direction as he claimed he did not even know their Premier League position sounded more like a reflex action rather than a renewal of old rivalries.

Ferguson will know Liverpool are irrelevant when it comes to assessing United's real title threats but still cannot help old habits dying hard with an aside guaranteed to get under the skin.

Nothing truly escapes Ferguson's all-detecting radar so he will be well aware that his side's 2-1 win at Old Trafford leaves Liverpool 24 points adrift of the league leaders - a painful statistic for supporters still keen to regard themselves as United's fiercest adversaries.

The contest of the world-class strikers between Manchester United's Robin van Persie and Liverpool's Luis Suarez never truly materialised in a peculiar match. Not through any fault of the Uruguayan.

Suarez was almost reduced to the role of pained observer in a first hour of overwhelming United superiority in which Van Persie demonstrated once more why the £24m handed over to Arsenal in the summer might just work out at the price on the ticket to their 20th title.

Van Persie scored one magnificent goal, could have had another and then set up Nemanja Vidic's unwitting second, a glancing blow from Patrice Evra's header that proved fatal to Liverpool.

Suarez, in sharp contrast, was starved of any supply worthy of the name and deserved better than to serve as little more than nuisance value until the introduction of Daniel Sturridge for the second half.

Whereas Van Persie was offered constant support and supply as he looked like a master striker at the top of his game, Suarez was restricted to occasional flashes as he was left to trouble Rio Ferdinand and Vidic alone for 45 minutes.

The highly impressive Sturridge scored and was the catalyst for a marked Liverpool improvement that allowed manager Brendan Rodgers some optimism that looked well out of reach as his team were passive and negative as United established their lead.

Ferguson was left to reflect on another important victory that keeps United seven points clear of Manchester City. Despite suggesting his knowledge of the Premier League table is a little sketchy in some areas, Ferguson will remember City clawed back an eight-point deficit much later than this last season.

Rodgers, meanwhile, was threatening to stretch credibility just a little too far with his after-match observations.

He had every reason to be pleased with Liverpool's lively last half-hour but it must be placed in its proper context. The game had gone too far United's way before they woke up.

For a manager preaching courage to his players, Liverpool did little to supports Rodgers's message until they were two goals down.

Liverpool may have impressed and even given United an anxious conclusion but the brutal fact remains that Rodgers has yet to oversee a Premier League victory against a team in the top half of the table this season.

And the whole afternoon was a harrowing experience for Joe Allen - described rather generously by Rodgers on arrival as "the Welsh Xavi" - who looked out of his depth against Michael Carrick and Tom Cleverley. The £15m midfield man who followed Rodgers from Swansea was regarded as the shining symbol of what so many like to refer to as the Liverpool manager's "philosophy".

At Old Trafford his only serious contribution was to almost give two goals away while being run ragged, and it was a surprise he lasted 80 minutes before he was replaced by Jordan Henderson. And what a chastening 80 minutes they were for him.

"The difference is down to the squad. Once we close the gap in the squad I have great hope we will be able to challenge."

This is, however, a fairly significant difference and is a theory that carries the same flaw undermining Arsenal's continued "jam tomorrow" insistence that they will compete with the world's best in two years. This relies on the world's best standing still for two years waiting for Arsenal to catch up - and Rodgers should not expect Liverpool's Premier League rivals to hang around declining to improve their squads while he bolsters his. It will not be happening.

Sturridge was the big plus point and certainly gave Liverpool something to cling to as he suggested he could form a potent partnership with Suarez. This in itself leaves Rodgers with a dilemma - does he stick to his trademark 4-3-3 or will he utilise the pair in a 4-4-2 formation?

If Rodgers was left with a "what might have been" it would come with the question of whether he should have picked Sturridge from the start and why Liverpool were so timid until, ultimately, it was too late?

Over the 90 minutes, and on chances created, Rodgers and Liverpool could not seriously complain about the outcome.

Liverpool have had moments of promise against the likes of United, Manchester City, Chelsea and to a much lesser extent Arsenal this season without getting the win that would back up Rodgers's talk of progress.

Rodgers cannot be blamed for accentuating the positive but eventually Liverpool must take more than consolation from these matches. They will get another opportunity in their next two Premier League away games at Arsenal and Manchester City.

United, meanwhile, can glow at what Van Persie has given them and press on in pursuit of another title.