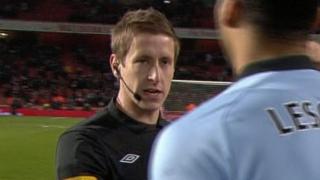 At the end of Manchester City's 0-2 victory at Arsenal assistant referee John Brooks advises City's players to acknowledge the travelling fans who paid £62 for their ticket.

Some City fans stayed away in protest at the price of tickets and the club are reported to have returned 900 of their 3,000 allocation.

A BBC Sport study last year revealed that Arsenal had the most expensive ticket prices in the Premier League, with the priciest costing £126.