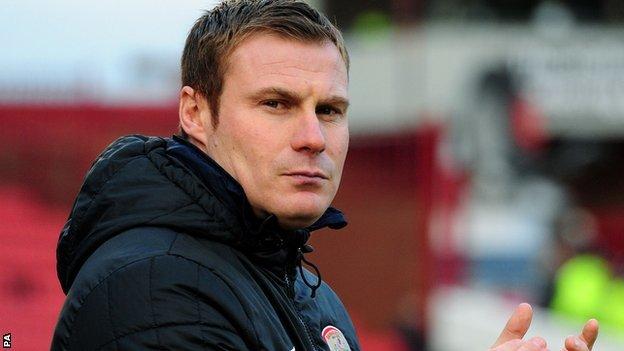 The 38-year-old former assistant manager was placed in temporary charge at Oakwell following the sacking of Keith Hill on 29 December.

"It is clear that David has the passion, personal dedication and the commitment of the players," said a statement on the club's website.

"They are essential if we are to maintain our Championship status."

The club added: "To be successful, David will also need the support of the fans and we ask that all those who care about Barnsley FC show unity and get behind David and the Reds."

Flitcroft was previously assistant to Hill at Rochdale before the duo moved to Barnsley in June 2011.

Who is David Flitcroft?

After defeat by Peterborough in his first game in charge, Flitcroft guided the Tykes to just their second win in 16 matches when they beat Burnley 1-0 in the FA Cup last weekend, before securing their first league win since 22 December, on Saturday.

Goalkeeper Luke Steele revealed earlier in the week that Flitcroft was the choice of the players.

"I think all of the players are happy with that and they would love to see him given the job," he told BBC Radio Sheffield.

"He's a really good coach, gets on with everybody and in the two games we've had under him we've done well."

He was not the first choice of the Oakwell board though.

The Tykes currently sit second from bottom of the Championship table, four points from safety.