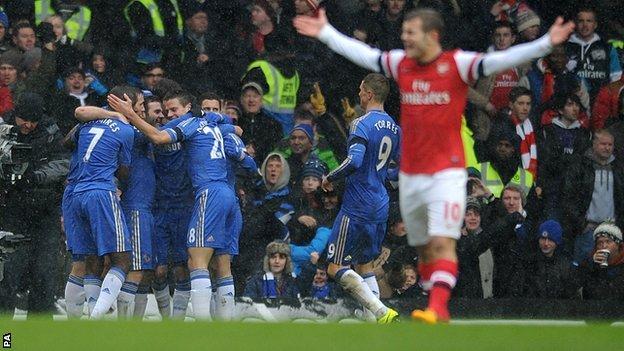 Chelsea held off London rivals Arsenal at Stamford Bridge to claim their first home win of 2013 at the fourth attempt.

Juan Mata drove in a shot to put the Blues in front, although the visitors could justifiably claim there had been a foul against them in the build-up.

Keeper Wojciech Szczesny brought down Ramires and Frank Lampard scored from the spot for Chelsea's second.

Forward Theo Walcott's clinical sidefoot finish gave the Gunners hope but the hosts held on for the win.

Chelsea had let a two-goal lead slip on Wednesday as they drew against Southampton and, when Demba Ba missed an excellent chance for them late on, it only added to their worries of a repeat here.

They also had to endure five minutes of added time in which centre-back Gary Cahill produced a vital interception and Gunners forward Olivier Giroud headed just over.

It was only a second top-flight win in six at Stamford Bridge under interim Blues manager Rafael Benitez, who had the rare experience of Chelsea fans not booing him at the final whistle.

"Loud Chelsea cheers greeted the final whistle. They were made to work hard for the win. Chelsea were quite brilliant in the first half but they knew Arsenal would come back at them and the Gunners did. But it was all smiles for Chelsea owner Roman Abramovich in the end."

Arsenal had been overwhelmed in the first half and when manager Arsene Wenger sent them out early for the second half, it was easy to imagine what the Frenchman's half-time mood had been.

The Gunners had enjoyed the first real chance of the game but they were soon overrun at a snowy Stamford Bridge.

The miss was immediately punished. Mata beautifully took down a diagonal Cesar Azpilicueta pass and shot high into the net past keeper Szczesny. On the touchline, Wenger was enraged his side had not been awarded a free-kick for a Ramires challenge on Francis Coquelin in the build-up.

The visitors almost responded with Santi Cazorla having a 25-yard shot palmed wide by keeper Petr Cech before Chelsea smothered Arsenal with the pace, power and panache of their play.

Eden Hazard mesmerised the visiting defence with a jinking run and saw his angled shot saved before Chelsea extended their lead.

Ramires was found unmarked on the right side of Arsenal's defence and, as Szczesny came out to make a spread-eagled save, the Chelsea midfielder went over the keeper's leg to earn a penalty.

A look at the stats

Szczesny escaped a red card but Lampard scored from the spot for his 195th Chelsea goal, which puts him just seven behind the club's record goalscorer Bobby Tambling.

The only downside to Chelsea's performance was the sight of striker Fernando Torres continuing to toil in front of goal, slicing one shot horribly wide just before the break.

After the interval, the Gunners began to look a threat at last. Centre-back Per Mertesacker and striker Walcott had efforts on goal, both shooting straight at Cech, while Giroud mistimed a header before the visitors pulled a goal back.

Cazorla pierced Chelsea's defence with a pass into the run of Walcott, who controlled the ball and eased a shot from just inside the area past Cech for his ninth league goal of the season.

The Blues were playing more like the away team as they threatened on the counter-attack and Torres broke clear only for a heavy touch to allow Szczesny to save.

Ba was also played through and, after rounding the Arsenal keeper on the edge of area, he seemed bound to score only for Thomas Vermaelen to block his shot.

The Senegal striker must have been relieved his miss was not punished by the visitors, and he had Cahill to thank for blocking a pass that would have put Walcott in late on.

But Giroud's missed header proved Arsenal's last chance as they fell to their second away defeat of the season and seven points off a top four spot.

"We gave them too much room in which to play in the first half. We had the first chance, a fantastic chance, but missed it.

"I thought Francis Coquelin was injured for the first [Chelsea goal], and I'm not convinced at all that it was a penalty on the second one.

"We made some changes at half-time and came out with a different attitude with much more initiative. We had Chelsea on the back foot but could not get it back to 2-2. We didn't make enough of our corners and free-kicks."