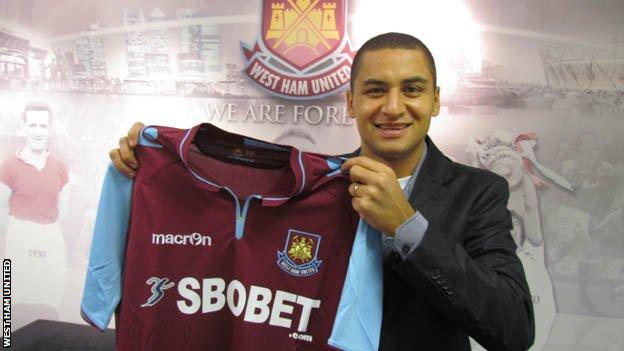 The Hammers have the option for a further three-year contract.

Paulista has scored 75 goals in 160 games for Cruzeiro although some of those were in the state championships against inferior opposition.

For some three-and-a-half years now, Premier League managers have had visits from agents carrying DVDs showing off the skills of Wellington Paulista.

They were seeking to cash in on his successful campaign in the 2009 version of the Copa Libertadores, South America's Champions League, when with five goals he was top scorer for beaten finalists Cruzeiro.

The fact that the tournament top marksman was Mauro Boselli (who flopped at Wigan) of winners Estudiantes shows that Premier League success is not guaranteed.

"I think I can do my best here and I am coming to England to prove to everyone that I am one of the best strikers in Brazil and to get better and better," Paulista told West Ham's official website.

David Sullivan, West Ham's joint-chairman, likened the striker to other players that have had an impact at the club in recent years.

"His arrival is similar to some of the other 'wildcard' players we have signed before, like in Demba Ba and Ilan," he said.

"They both made significant contributions and if he can match their efforts he will be an excellent acquisition for West Ham United."

Tim Vickery, the BBC's South American football expert, said Paulista has the speed to work the flanks and can play as a support striker as well as centre-forward.

"A late developer by Brazilian standards, he was 23 before he made a mark on his country's first division, scoring nine goals for Santos in 2006," he said.

"He then spent a few months in Spain with Alaves, returning home to join Botafogo in 2008 and Cruzeiro the following year - where he has been ever since, with the exception of an unsuccessful few months with Palmeiras in 2011.

"He was Cruzeiro's top scorer (with 10 goals) in the recently completed Brazilian Championship. After two mediocre years the club need to rebuild, and at last, he has the chance to show the English public what he can do."

Wellington would be competing with Carlton Cole, Ricardo Vaz Te and fellow loanees Chamakh and Andy Carroll for a place in West Ham's attack.

Carroll is expected to return from a knee injury within the next fortnight, but fellow striker Modibo Maiga is likely to miss several matches as he joins up with Mali for the Africa Cup of Nations.

Maguire, who was signed from Irish side Waterford United, is likely to start off in the Hammers' development squad.