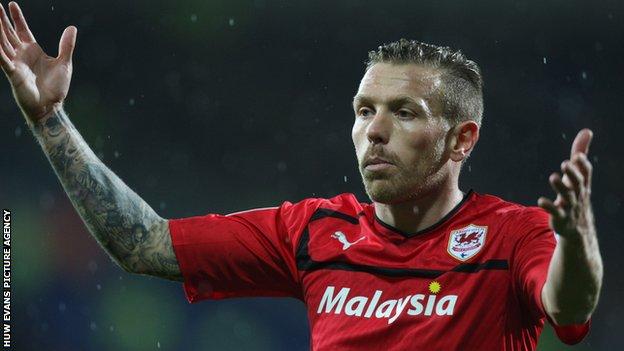 Craig Bellamy says he cannot commit himself to playing for Wales again because of his fitness issues.

Wales manager Chris Coleman has urged Bellamy to say whether he still wants to be involved in the squad, but Bellamy remains noncommittal.

"If I have something to offer the team, I'll have a serious look at it," said Bellamy on a possible Wales return.

"But that's a number of weeks away, I do concentrate week by week. I have and the honest truth is I don't even know if I'm playing next week.

"There's no point looking further than that. Ipswich is the main target and we'll just have to push on from there."

Having played in two international friendlies before the start of the season, a calf injury prevented Bellamy from playing for Wales in the World Cup qualifiers in September against Belgium and Serbia.

He returned to fitness to play in four games in three weeks for Cardiff, but picked up a knee injury that forced him to miss Wales' next qualifiers against Scotland and Croatia.

An ankle injury then further disrupted his season, but the former Liverpool and Manchester City striker has been injury-free since mid-November and was able to start four games in 11 days for Cardiff over the Christmas period.

Such a run of games has been a rarity for a player who has been forced to carefully manage his training and playing.

"I say it's my knee but it's not my knee, it's my hamstrings," explained Bellamy.

"Because of the sprints I make and the high intensity I play at, I do overload my hamstrings. It's no coincidence I've had eight, nine hamstring tears in my career, which is not ideal for a player like myself.

"The next time we'll have a period like this was in April so this was a one-off.

"I knew this Christmas period would get me up to speed to the level I need to play at to be able to have an influence in the team and I was able to do that," he said.

Wales manager Coleman has said the door is open for Bellamy to return to the squad, but stressed he will not "beg any player to play for their country".

The next Wales squad will be announced towards the end of January for the friendly with Austria on 6 February in Swansea that precedes a qualifying double header in Scotland and at home to Croatia in March.

But with Cardiff leading the Championship by seven points, Bellamy's focus seems firmly on staying fit to maintain the club's promotion charge rather than returning to the international fold.