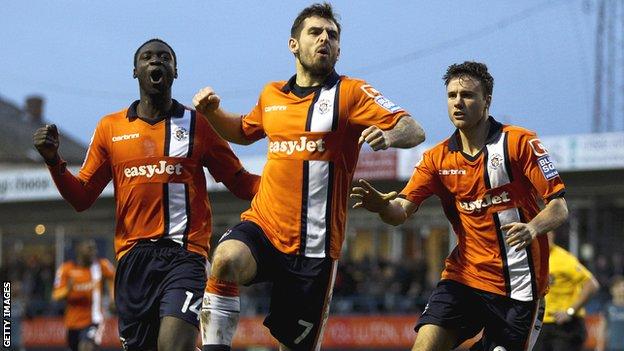 Seven days on from their and two weeks prior to in the fourth round, Luton Town will be aiming to avoid an upset of their own.

The giant-killers become the giants, as the Hatters host Northern Premier First Division North side Skelmersdale United on Saturday.

A place in the last eight of the FA Trophy is at stake, in what will be Skelmersdale's biggest match for more than four decades.

And their manager, Tommy Lawson, believes the Blue Square Bet Premier side, who are 65 places above them in the league pyramid, can be toppled.

"Well, they beat Wolves," he told BBC Radio Merseyside. "Can we do it? If we're on top of our game, it's not beyond us."

Who are Skelmersdale United?

Skem's last big day in the limelight was in 1971, when they beat Dagenham 4-1 at Wembley to win the FA Amateur Cup.

But Lawson says cup fever has, once again, gripped the people of West Lancashire, adding: "I don't think it's just big for the club - it's big for the town.

"The amount of interest that this has generated is very unusual. We're getting complete strangers saying they want to come down and watch the team.

"I would suggest it is [the club's biggest game since 1971]. We all know the history of Luton, and to play them at Kenilworth Road has got an appeal about it. It's there to be enjoyed and it's certainly one that you'll be able to tell your kids about."

It's not very often that you get the chance, as a semi-professional, to test your skills and abilities against the top sides

To outsiders, the chances of a shock may look remote, but Skelmersdale go into the game in impressive form.

The victory at Warrington maintained their unbeaten start to the league season. They have won 15 and drawn two of their 17 matches and trail leaders Mossley by four points, although Skelmersdale have six games in hand on the only team above them in the table.

no one would blame Luton boss Buckle for resting some of his players for a game against a team from the eighth tier of English football.

Whatever Luton's starting line-up, Skelmersdale are determined to enjoy the day.

"We're going to be up against full-time professional footballers," said Lawson. "We're looking forward to the challenge of that. It's not very often that you get the chance, as a semi-professional, to test your skills and abilities against the top sides, and that's what Luton are."

"Luton can enjoy the title of giant-killers, but we've done that. We went to Boston and Guiseley, where we weren't expected to win, and won.

"We get it down, we pass and we play. We're hoping we can go to Luton and not only entertain our own fans, but entertain theirs as well."