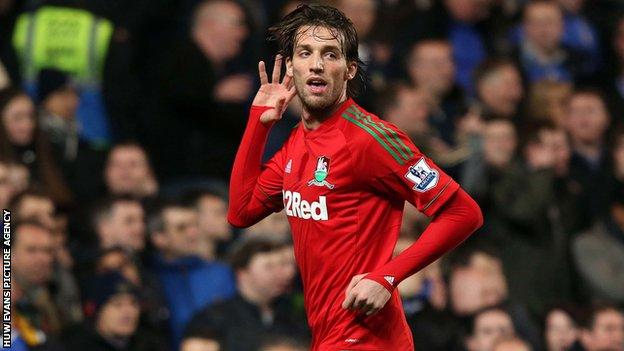 Michael Laudrup claims Swansea striker Michu is "the bargain of the season" and does not expect the Spaniard to be sold in January's transfer window.

Laudrup believes only a small number of clubs could afford the 26-year-old, who has scored 16 goals in 2012-13.

"It was the bargain of the season. We know that. There aren't many clubs who can buy him," said the Swansea manager.

"I'm not afraid something is going to happen because I am sure he will be here for the next five or six months."

is under contract with Swansea until 2015, but has been linked with a big-money move away from the Liberty Stadium.

Only Manchester United's Robin van Persie and Liverpool's Luis Suarez have scored more than Michu's 13 Premier League goals this season, prompting Laudrup to suggest his player is worth £30m.

Atletico Madrid have reportedly renewed their interest in the player and Wales manager Chris Coleman has already stated that Swansea will struggle to keep hold of Michu.

But Laudrup is adamant his star player is settled in Swansea and says only Europe's biggest clubs, including Barcelona, Real Madrid and Bayern Munich, could afford Michu.

"I cannot see who can sign him because there are very few clubs, but in the summer, you never know," added Laudrup.

"There are some [clubs] here. In Spain there are only two, I don't think Barcelona and Real Madrid ever have enough players.

"Italy? I don't think so, they are trying to sell. In Germany [only] Bayern Munich. So there are only a few clubs but he is happy here, happy with the team and happy where he is."

Laudrup does admit Michu has a priceless quality which will be attractive to big clubs around Europe.

"He has one chance, it's one goal. That is a top-class centre-forward," said Laudrup.

"He just needs one or two chances and he scores one goal. Those are things you play a lot of money for."

"I think Michu will go to the Spanish national team very soon," said Martinez. "To get that achievement shows you what a season he's having because you're looking at trying to get into the best team in history.

"I think he's done really, really well and it was the perfect moment in his career to come to the British game. He can go a long way."