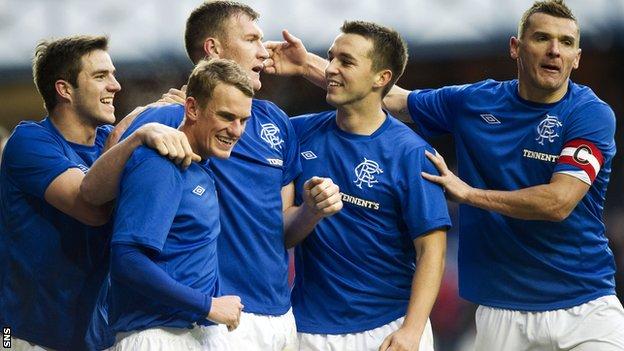 Rangers will consider leaving Scottish football if plans to restructure the leagues are pushed through.

Clubs are set to vote on a proposal which would create three divisions, with 12 teams in both of the top two leagues and 18 in the third flight.

But Rangers chief executive Charles Green is not in favour of the plan.

"If that's what we have sat here eagerly awaiting, my advice is the quicker we can leave Scottish football the better," he told the club website.

We might as well have a winter break from now until August. I can't see any point in carrying on with meaningless matches

It was announced that teams will be asked to vote on the implementation of a Premier League of 12 sides, a Championship also of 12 and a National League of 18.

However, Green, whose Rangers side are 17 points clear at the top of the Third Division, believes this plan would not make the league more appealing.

He said: "I can't see anything that is going to transform the finances, the status or the excitement.

"If this does happen, what is the point of us finishing the season?

"Why should we send players out to get broken noses - like Ross Perry last week - or have players getting surgery when no-one can get promoted and no-one can get relegated?

"We might as well have a winter break from now until August. I can't see any point in carrying on with meaningless matches.

"In what league do you win a division and then end up playing the same teams again the following season? There is no meaning to it, in reality."

The subject of Rangers and Celtic leaving Scotland has long been discussed but Green knows there is no existing escape route.

Any club playing matches in Scotland needs the blessing of the Scottish Football Association, Uefa are currently opposed to cross-border leagues and England's top-flight has rejected the notion of welcoming the Old Firm.

"On first glance, of course, there is nowhere for us to go because Fifa have made their feelings known on cross-border leagues," added Green.

"Hand on heart, there isn't an option but that doesn't mean we shouldn't start looking for an option.

"If all we have to look forward to over the next four years is more madness then we would be failing as directors not to explore the alternatives."

However, Celtic chief executive Peter Lawwell insisted his side were "committed" to the SPL, and that the club supported the proposed reforms.

"We support the SPL, we're committed to the SPL," he said.

"We as a club support it. It's not perfect, but it's the best available, and I don't think you throw out the best in pursuit of the perfect.

"I think it will be beneficial to the game."