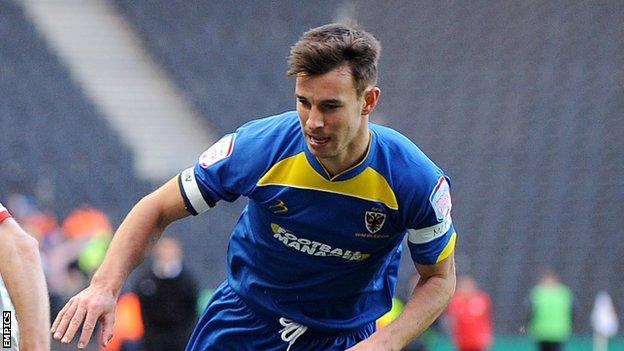 The 25-year-old, who joined the Gills on a free transfer last week, made his debut from the bench in the 2-0 win over Bristol Rovers at the weekend.

He told BBC Radio Kent: "That's good for a player. You know you've got to play well when you've got the shirt.

"You are disappointed when you are left out but it makes you try harder in training and on the pitch."

The win at Bristol Rovers kept Gillingham top of League Two and the former Bournemouth midfielder says his new club's ambition matches his own.

"I want to be successful as a player and be in a successful team," he said.

"The club is top of the league, going forward and ambitious and so am I.

"I have come here to get promotion this season and then push for play-offs or promotion next year too."

Gregory, who played 18 games during a loan spell at AFC Wimbledon earlier this season, was released by Bournemouth at the end of last month.

He says agreeing a move to Gillingham was simple once he heard of interest from Priestfield.

"The gaffer rang me one evening and told me he was interested in taking me," he continued.

"I had a number of conversations with him.

"I spoke to [Gills striker] Danny Kedwell and [defender] Adam Barrett before signing and they had nothing but praise for the club and the manager.

"It made my decision even easier.

"We got a deal agreed, which was fairly straightforward, and a couple of days later I was signing."

Allen says he decided to try and sign Gregory after watching the midfielder in AFC Wimbledon's 2-1 defeat by MK Dons in the FA Cup second round.

"He captained Wimbledon and I thought he was the best player on the pitch," Allen said.

"He was a good passer, he was tenacious, he won his headers and he organised the players around him."