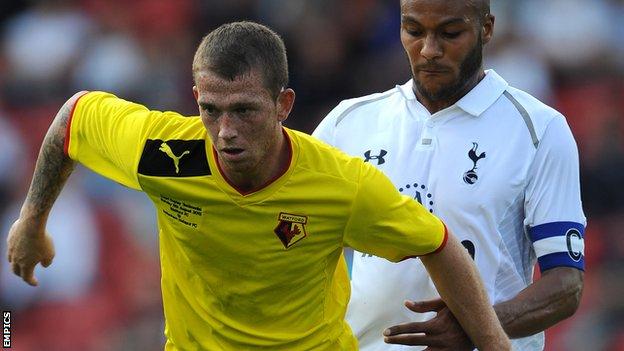 Preston North End have completed the signing of Joe Garner, who was a free agent after being released by Watford.

The 24-year-old striker has agreed an 18-month contract at Deepdale.

in August 2011, but only scored once in 27 games for the Hornets and

"The qualities he has got in front of goal are ones that will serve us well and I am excited to have him on board," said boss Graham Westley.

"I looked at Joe in the summer and it wasn't financially viable for us to strike a deal with his parent club, so we had to leave it alone then.

"I kept tabs on him throughout the season and he has obviously gone out and had a strong period on loan at Carlisle."

Nottingham Forest paid in excess of £1m for the ex-Blackburn trainee in 2008 after he enjoyed a prolific first stint with Carlisle.

He failed to play a first-team game at Ewood Park, but 19 goals in 53 appearances for the Cumbrian side convinced then-Forest boss Colin Calderwood to sign him.

Garner, who scored eight times during his loan spell with Carlisle earlier in the season, will be available for selection for the Johnstone's Paint Trophy tie against Coventry City on Thursday.