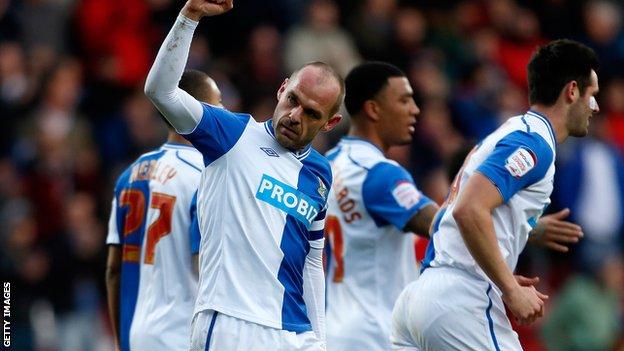 Gary Bowyer has thanked Blackburn captain Danny Murphy for his assistance since he became caretaker manager.

Rovers have won all three games since

And Bowyer told BBC Radio Lancashire that the input of ex-England midfielder Murphy, who joined Blackburn in June, has been invaluable to him.

"Since we came in (working with the first team) he's been magnificent with myself and Terry (McPhillips). We can't thank him enough," said Bowyer.

"He's a great influence on the pitch, he's got a good opinion on football and he's shared that with myself and Terry. We've taken it on board because he's been there, seen it and done it."

Bowyer and youth boss McPhillips will until the end of January, while Blackburn search for Berg's successor.

Murphy, 35, scored the opening goal in

Blackburn will be the opponents for Wolves on Friday, in what will be the Molineux side's first match under

If Rovers win, it will be the first time since October 2007 that they have registered four consecutive victories in all competitions.

Meanwhile, defender Bruno Ribeiro has returned to his native Brazil, joining Clube Atletico Linense on loan until the end of the season.

The 29-year-old has made five first-team appearances for Rovers.