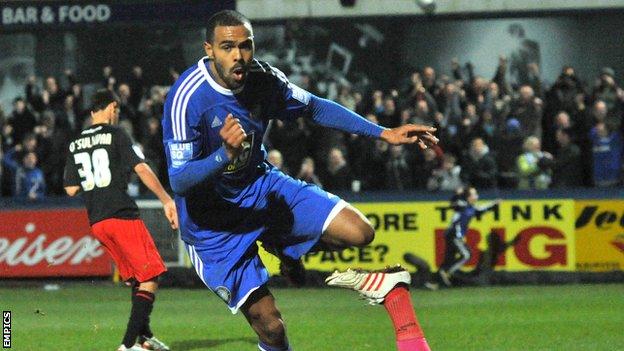 Macclesfield's FA Cup goalscoring hero Matthew Barnes-Homer is to be offered a new contract with the non-league side.

The striker's brace and took Macclesfield into the fourth round for the first time in their history.

Manager Steve King told BBC Radio Manchester: "We aren't selling him. We're in the process of doing a new contract for him, and he's earned it.

"He took a massive wage cut to come here and he deserves a new contract."

after a short spell playing in Sweden and his two goals against Cardiff took his tally for the season to 20.

King continued: "People wrote him off when he came here. They were saying he wasn't going to score but I've always believed in him.

The 26-year-old was flattered when told of King's plans to give him a new contract, but insisted his main concern was to carry on scoring for the Silkmen.

The former Luton front man said: "I enjoy playing football, I'm enjoying the spirit and the way we play.

"I'm not a player that goes [to clubs] for money. I like to enjoy my football and I like to score goals.

"I wanted to prove a point - to prove to everybody that I can score goals. I've done it everywhere else I've been. That's all I've ever wanted to do."

A home tie against either Wigan or Bournemouth awaits in round four.

Before that, Macclesfield will hope to continue their push towards the Blue Square Bet Premier play-offs, starting with a trip to Braintree on Tuesday.