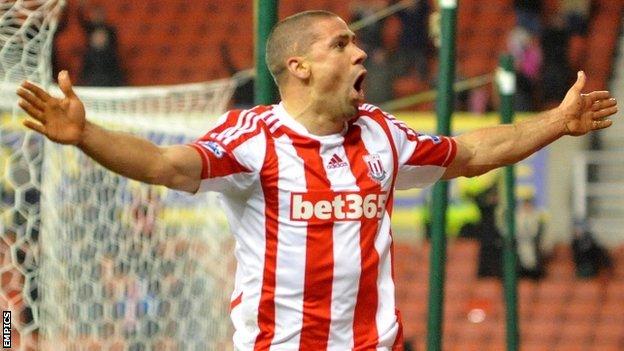 Walters made it 2-1 with a header, then converted Jones's pass before Cameron Jerome added a fourth late on.

It was a heroic effort by the Danish keeper, but the Potters' hero of the day was Walters, who bounced back brilliantly from last weekend's nightmare display against Chelsea.

On that occasion, the forward scored two own goals and missed a penalty, but he was on target at the right end on a chilly Tuesday night.

Tony Pulis's side enjoyed the majority of the possession during the opening half, but it was Palace who should have taken the lead 10 minutes before the break.

Forward Zaha, understood to have been watched by Manchester United manager Sir Alex Ferguson, was brought down by Ryan Shawcross in the area. Easter stepped up but his effort was pushed on to the post by Sorensen. Zaha, who was also booked for diving, was substituted at half-time.

Dean Whitehead and Matthew Etherington had gone close for Stoke before Jones, who replaced Peter Crouch in the second half, headed in a weak effort that should have been saved by Lewis Price.

Stoke must have thought they had secured victory until three minutes before the end of normal time when Jonathan Williams fell under the challenge of Shawcross and Palace's top scorer Murray slotted in from the spot.

The match swung back in favour of Stoke with just a few minutes of extra-time played when Walters headed in, before slotting his second past Price.

Jerome then made the scoreline emphatic when he rounded Price to score in the final minute.

"I wasn't going to play Jon tonight - I had decided on Friday that I would give him a rest.

"But then after what had happened on Saturday, I decided the best thing to do was to get him out there again.

"And scoring the goals and playing the way he played, I think it's just great for him. It will wash away what happened on Saturday.

"He gives everything, Jon. He is just a very gifted individual in lots of respects, and his biggest asset is his big strong heart and the British bulldog spirit he has got."