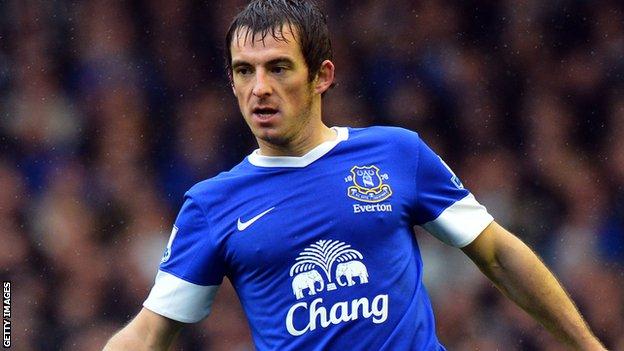 Manager David Moyes plans to monitor the injury status of Leighton Baines after revealing the left-back played in Everton's 5-1 FA Cup win at Cheltenham despite nursing an ankle problem.

Baines, 28, started at Whaddon Road and scored Everton's second before he was substituted just after the hour.

"Leighton has got a bad ankle problem which I need to watch and be careful with that," said Moyes.

"I felt we needed him because we have to respect the players at this level."

Baines was one of several first-team regulars named in Moyes's starting XI and the Scot was rewarded for choosing a strong side against the League Two team as Everton moved comfortably into the fourth round.

The Toffees boss admitted he decided not to field a weakened team after watching his side lose to Leeds in the League Cup when he rested several players.

"I was disappointed when we lost our League Cup tie to Leeds United," he added.

"I gave a few players a go and I didn't think we came up to scratch.

"I wasn't going to take a second chance [against Cheltenham], that's for sure. I just felt we needed the people who knew what was going on.

"It was a very professional job. I want to try and progress in the Cup if we can.

"We've got a bit of momentum and we want to try and keep it going."

Victor Anichebe was particularly impressive against the Robins, providing the assist for two of Everton's goals.

The forward was recently linked with a move to Reading, but Moyes reiterated his intention not to sell any of his players during the January transfer window.

He said: "Anichebe to Reading? No, no truth in that.

"We won't be selling anyone if I have my way, that's for sure."