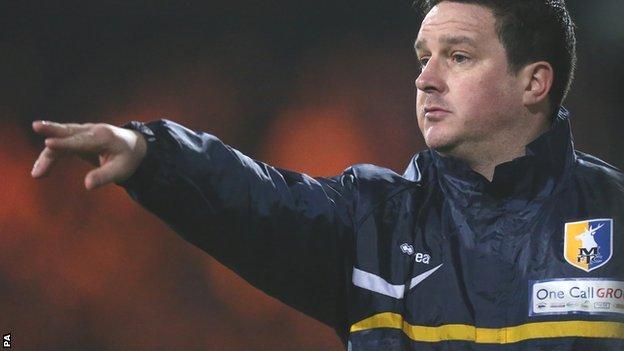 Mansfield Town boss Paul Cox says their dream FA Cup tie against Liverpool has given them the taste for glory.

The Stags pushed the Premier League giants all the way before losing their third-round tie 2-1.

And Cox, whose side are ninth in the Blue Square Bet Premier, told BBC Radio Nottingham: "We have laid some strong foundations at the football club over the last 18 months.

"We want some big games here and want to be competing with the best."

Cox added: "It will take time and we have to be patient but the fan-base at this club can make such a massive difference."

Mansfield, who are five points adrift of the play-off places but have at least two games in hand on all but one of the sides above them, dropped out of the Football League in 2008.

But since John Radford took over as chairman in 2010 they have started to invest more heavily in the club both on and off the pitch and are intent on winning promotion from the Conference.

Cox guided the Stags to the play-off semi-finals last season - his first in charge - and was rewarded with a new two-year contract in May.

He said he was delighted with their display against Liverpool on Sunday, adding: "I am so proud of them.

"In the first half we were playing the occasion and not the match.

"There were no hard words at half time but what I said to them was that we didn't want to finish the game with any ifs, buts and maybes.

"And the performance after the break told a story. The lads just went for it and it was a great game of football. We could have nicked something from it and we could have had the fairytale of going back to Anfield.

"Brendan Rodgers [Liverpool manager] has paid us a lot of credit. It's a scenario where 20 minutes into the second half I thought we were really on top and he takes off a centre-forward like [Daniel] Sturridge and brings on [Luis] Suarez. We were on the front foot until the substitution.

"We lost a football match and I don't ever want to celebrate losing a football match - but a lot of positives can be taken out of it. Our shape, work ethic and mindset were unbelievable and if we take that into the rest of the season then we can be successful."

But Cox refused to complain about several refereeing decisions that did not go their way - notably the controversial second Liverpool goal in which Suarez used his hand to control the ball before netting.

"We had a few chances and couple of handballs in their box and the goal [by Suarez] was a definite handball," Cox said. "But sometimes it goes against you. These things happen.

"If we'd have been stood in Liverpool's position, we would have taken it so you have to take it on the chin.

"We didn't give a good account of ourselves in the first half. In the second half I cannot credit the boys enough.

"I am sure the fans are proud of the players. Each and every one of them can be proud of themselves. It was a shame we couldn't nick the equaliser."

Stags goalscorer Matt Green told BBC East Midlands Today: "We possibly gave them a bit too much respect at the start but we built into the game, gradually got our belief and were unlucky to go out in that manner.

"The whole game is a blur. It was just crazy. You look at the guys next to you and they are guys you watch on television week in, week out so to get a goal against those guys and get a great performance was a dream come true. It is something I have dreamed about since I was a little kid. I will remember it for the rest of my life.

"We are gutted about the result and the way we lost but everyone can come away proud that we gave them a good game. They really are world-class players.

"It is something we will remember for the rest of our lives. The atmosphere was amazing. The fans got behind us and that gave us even more belief - they didn't stop believing and nor did we.

"Now we have to crack on with the league and the rest of our season."