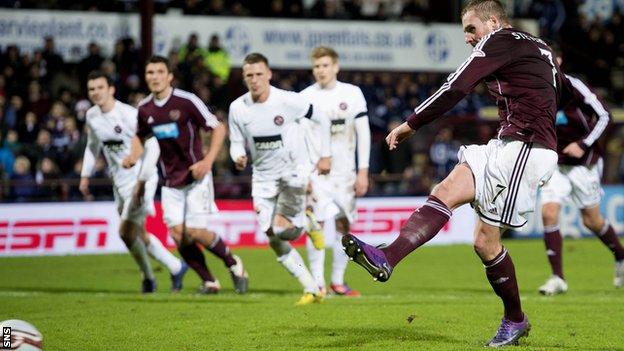 Representatives from seven Scottish Premier League and eight Scottish Football League clubs will convene at Hampden on Tuesday to further investigate the proposal to reshape the structure of Scotland's senior leagues.

Such is Scottish football fans' experience of the torpid character of the game's governance and the appetite of its blazer-clad office bearers to hold meetings, they could be forgiven for yawning on hearing of this latest get-together.

Yet the remarks made on BBC Radio Scotland on Saturday by David Longmuir, the SFL's chief executive, suggested a compromise might be about to be reached with the SPL in time to change the league formats for next season.

This is breakneck pace by Scottish standards.

The details are sketchy, but we do know this: the SPL proposal to have two top leagues of 12 with a league of 18 teams below is winning the support of some of the SFL's 30 clubs that had previously voted in favour of a 16-10-16 format.

The promise of a fairer spread of revenue, the lessening of the impact of relegation, greater movement in and out of the top league and the introduction of one body to replace the SPL and the SFL seems to have won them round.

Longmuir told listeners that the major drawback with his original favoured 16-10-16 option was that SPL clubs would have only 15 home matches from which to raise revenue.

However, the 12-12-18 structure - tried and abandoned in Switzerland and Austria - gives the big clubs 18 games at home.

Teams in the leagues of 12 would play each other twice, home and away, and when those 22 matches had been completed the leagues would split into three sections of eight for a further 14 matches, split evenly between home and away.

The top octet would contest the title and European places; the bottom four of the top league and the top four from the second tier would comprise the middle eight to decide which quartet played in the top league the following season; and the bottom eight teams in the second league would slug it out to avoid dropping into the league of 18.

There are many aspects of Scotland's struggling national sport that will not be fixed by a change in the league format.

Among those are high ticket prices, unfavourable kick-off times, a decline in the standard of player, the lack of indoor training facilities, losing young players to English clubs, dwindling crowds, the resurgence of crowd trouble and an excessive number of senior clubs for Scotland's population.

But the enthusiastic Longmuir deserves credit for seeking a compromise between his 30 clubs and the SPL 12.

His view is that Scottish football must consider the fate of all 42 clubs, that a more equitable share of cash would create a "common weal" thereby allowing the game to prosper.

The sponsorship of the SPL by the Clydesdale Bank and the SFL by Irn-Bru ends in May.

Further, fans have been clamouring for change. Many followers of SPL clubs feel the "product" is uncompetitive and stale.

If the proposals are passed in time for next season, and that seems a long shot, presumably one team would drop out of the SPL to be replaced by the First Division winners.

But which clubs would make up the second league of 12? Would there still be relegation for the bottom team and play-offs? Or no relegation and the top two from the Second Division come up to make up the numbers?

How fair would that be on the third-and fourth-placed teams who were eyeing a play-off berth?

Similarly, is it acceptable that the Third Division winners, very likely to be Rangers, and possibly one other side, should there be play-offs, find themselves back at the grounds they had played at this season but in an 18-team league?

If these points can be debated and clubs can be appeased, then at this point next season, we would be at the 22-game mark.

The current SPL table shows five teams having played that number while others have one or two games in hand.

Depending on the fixtures and the standings, these would need to be completed, winter weather allowing, before a split could be made.

Using the current table as a guide, Hearts, St Mirren, Ross County and Dundee would have their points tally set to zero as they merge with the current First Division top four of Dunfermline, Morton, Partick Thistle and Raith Rovers.

The points margin between ninth and 12th in the top league would count for nothing, as would that between the top four in the league below. The slates would be wiped clean.

Would there be a winner of this middle eight "league" and would a trophy be awarded? Or is a top-four finish and a place in the top tier reward enough?

Surveys suggest fans are tiring of facing the same teams four times a season. For the top eight teams, nothing would change in that regard; for those in the middle eight there would at least be fresh opposition.

That last phrase is not something Longmuir and his counterparts at the SPL and SFA, Neil Doncaster and Stewart Regan, will want to hear on Tuesday.

But to convince supporters that restructuring heralds a new dawn, the game's administrators may need to don the battle fatigues anew.