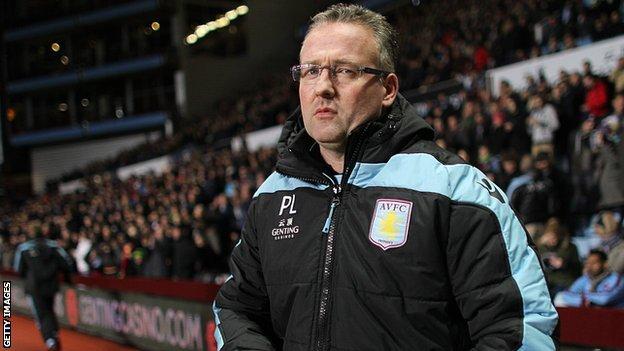 Aston Villa manager Paul Lambert says getting the club to the Capital One Cup final at Wembley would be his biggest achievement in the game so far.

Villa play the first leg of their semi-final against League Two Bradford at the Coral Windows Stadium on Tuesday.

Lambert won the Champions League with Borussia Dortmund and Scottish League title with Celtic as a player.

Asked if getting Villa to Wembley would surpass his previous achievements, he said: "I think it would, yes."

He added: "I never view it as any great achievement on my own behalf. It's the players and the fans.

"I never really look at myself and think 'I'm going to do that' because it is irrelevant. The important thing is what happens to this club and the players."

Lambert is in his first season in charge of the Midlands club after taking over during the summer when he left Norwich.

The 43-year-old has endured a difficult time in the league with Villa one point above the relegation zone as he has been hampered by injuries and having to heavily rely on the club's youngsters.

However, his side's Capital One Cup campaign has proved Villa's solace, with wins over Manchester City and Norwich helping them to the last four.

Victory over two legs against Bradford would take Villa to the final, where they would play either Chelsea or Swansea at Wembley on Sunday, 24 February.

"For this club to get to Wembley again would be extraordinary," said Lambert. "In a one-off game there you just never know what could happen.

"I think every player would tell you it would be absolutely phenomenal."