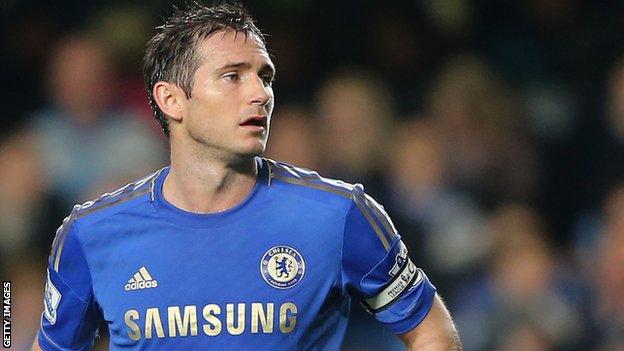 The 34-year-old's deal expires in the summer and there is no sign of a contract extension.

Wilkins, who played for Chelsea and United, says the midfielder would win more medals if he moved to the Reds.

"He'll want to continue to win and play at a high level - and there's no higher level than Old Trafford," said Wilkins.

Lampard, who has won three Premier League titles and a Champions League with Chelsea, says he thinks he has "a good few more years" left at the top level.

Wilkins agrees and says that United manager Sir Alex Ferguson is the ideal person to get the best from Lampard, given his handling of ageing stars Ryan Giggs and Paul Scholes, now 39 and 38 respectively.

"You have the master of utilising the older player in Sir Alex Ferguson, so I think it would be a tremendous move for Frank and a good one for Manchester United as well," Wilkins told BBC Radio Manchester.

"You only have to see the performances Giggs and Scholes have put in over the last few years - and they are four years older than Frank!"

Former England international Wilkins does not think that Lampard would have any problems winning over the United fans after 10 years with one of their main rivals.

"He'll win them over because of his footballing ability," he said, adding that United need more goals from the middle of the pitch, which is where Lampard operates.

Meanwhile, Juventus midfielder Andrea Pirlo says he would relish the chance to play alongside Lampard.

"They would be mad to let him leave Chelsea. He's still one of the best in the world," said the 33-year-old Italy international.

"If he wants to play in Italy I would welcome him to Juventus with open arms. Lampard could have another four years at the top in Italy."

Chelsea fans chanted "sign him up" when Lampard came on as a substitute in the 5-1 FA Cup win at Southampton on Saturday.