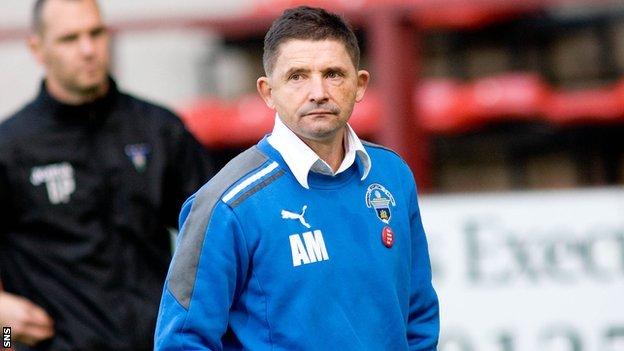 Allan Moore is demanding that his Morton players pay the same attention to their performances against the First Division's struggling sides as to those vying with the Ton for promotion.

Having beaten Partick Thistle and Dunfermline recently, Moore was annoyed to see his players lose to basement side Dumbarton and draw at Cowdenbeath.

"They have to forget who they are playing," said the manager.

"They need to start concentrating on just beating them."

The Greenock side now sit in second place, behind the Pars on goal difference, and two points ahead of Thistle who have two games in hand.

But Moore wants his players to be completely focused when they face teams battling to avoid the drop to the Second Division.

"The guys at the bottom of the league are fighting for their lives," Moore told BBC Scotland after watching his team draw 1-1 with eighth-placed Cowdenbeath in Fife, where victory would have clinched top spot in the division.

"It's a harder game against them.

"The name of the team you are playing against doesn't matter, whether it is Cowdenbeath near the bottom or Dunfermline near the top.

"The players have to put themselves out on that pitch for 90 minutes, regardless of who it is we are playing against, and get a result."

And the former Stirling Albion boss is demanding that the entire team work together to stem the loss of goals - only the league's bottom three teams have conceded more than the Ton's 27.

Moore said: "For a team that's up there at the top of the league, our goals against tally is not good enough so for the next month they will be working their socks off about getting up the pitch and getting back.

"It's a team thing, it's not just the back four.

"One-each [against Cowdenbeath] isn't good enough. We lost the ball about three-quarters up the pitch and it's disappointing that three passes later it's in the back of your net.

"Morton were expected to come and win the game - so we've got to go for it.

"And when we go for it we leave gaps at the back because we've got a lot of forward-thinking players. It makes us look weak defensively.

"We are disappointed that we have come away with one point but it could have been worse."