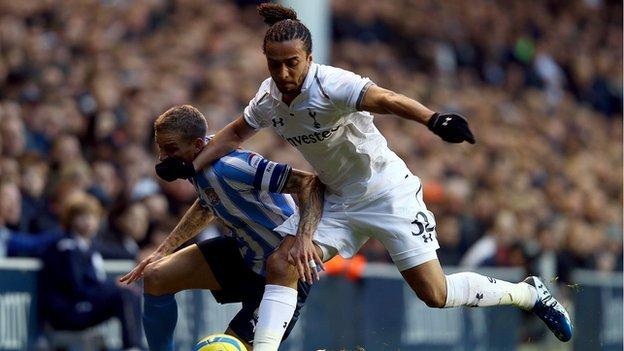 Cameroon's Benoit Assou-Ekotto is confident he can retain his starting place in the Tottenham team after returning from a four-month injury lay-off.

He made his comeback in yesterday's 3-0 FA Cup win over Coventry.

Jan Vertonghen and Kyle Naughton have impressed at left-back since Assou-Ekotto injured his knee in September.

"It's not a problem," he said when asked about competition for his position.

"When I came here six years ago I was in competition with Gilberto, Lee Young-Pyo and Gareth Bale and it ended up being my place (in the team) so it's not a problem."

Assou-Ekotto, who has been the club's first-choice left-back since he joined from Lens in 2006, slotted easily back in to the team on Saturday.

The 28-year-old says he had no problems during his comeback game thanks to Tottenham's recent excellent form.

"It was not difficult because it is more easy to come back in to a team who are playing well," the defender told Spurs TV Online.

"It was easy to play. I am cool to come back and to have a win at the end of the game so it's cool for us, for the team and for me."