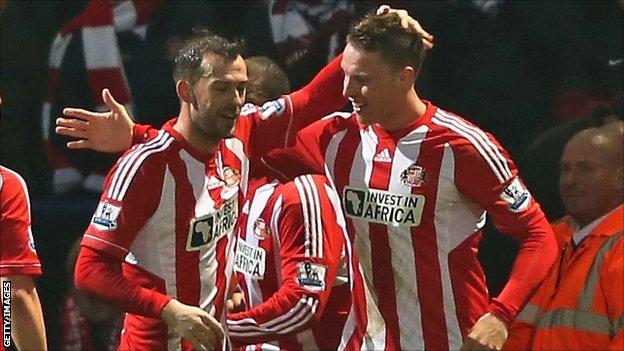 Wickham came off the bench to score in the second-half and offered support to lone front-man Fletcher as the Wearsiders fought back from 2-0 down.

"It looks as if they can play together," O'Neill said.

Despite a haul of medals from his playing and managerial career, O'Neill is yet to lift the FA Cup, but is keen for the Black Cats to enjoy a fruitful run in the competition.

He made just three changes, despite the club's slightly precarious league position, with the cup a priority for the club, players and supporters.

"We couldn't change it much because we couldn't fill the bench. We want to give the competition it's proper merit," he said.

"I don't care about the number of games we play. It doesn't matter. I want to stay in the competition and I want to try and do well in it.

"We had 5,000 people who have paid their hard-earned money to come down to support us. They deserved better than what we were serving up in the first half."

"It was a great contribution. It was good for Wickham to get the goal."

He added: "It's a great confidence booster for Connor. It's probably the first time he's been on the field at the same time as Steven Fletcher."

Fletcher has largely operated as a lone striker this season, with Benin international Stephane Sessegnon playing "off the striker" in a floating role.

England under-21 cap Wickham initially appeared out of favour, waiting until November for his first outing of the campaign, but has since established himself as deputy to the Scotland international with a further five appearances.

Meanwhile, O'Neill has hinted at activity during the January transfer window, after two further injuries to first-team players at the Reebok Stadium.

Key players Lee Cattermole, John O'Shea and long-term absentee Wes Brown are among the senior professionals out of action, forcing the Black Cats to name just six substitutes from a possible seven.

"It's not a point whatsoever [the six substitutes]. It's just the way things fell," O'Neill added.

"We have a couple of illnesses and injuries to players, we don't have the biggest squad and we're really stretched.

"We've obviously lost a couple more [Danny Rose and Carlos Cuellar] but we're going to try and do something about it if we can - well, not if we can - we need to.

"I think I get on reasonably OK with the owner, he's well aware and he wants to do something about it."