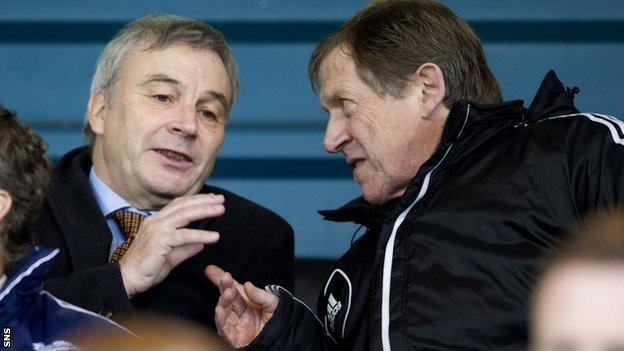 The former Scottish FA chief executive told BBC Scotland that the format of two top leagues of 12 which splits into three leagues of eight had been tried - and ended - in Switzerland and Austria.

"They tried it for six or seven years. It's not there any longer," he said.

"They changed back to a 12-10 and then regional football."

And, speaking at Almondvale Stadium on Saturday where he had been invited by Livingston to attend their draw with Partick Thistle, he added: "Each country has to find its own solution but each country can learn from others' experiences.

"You don't have to repeat the mistakes of others.

"I am trying to help the guys here [at Livingston] understand what is happening elsewhere."

The new format would mean clubs in the top two leagues playing 22 matches before splitting into a top, middle and bottom eight.

The top eight would play for the title, the middle eight would contest promotion and relegation spots in and out of the top league, and the bottom eight would fight to avoid dropping into the third tier.

"But I think there is a way back from this. I am pleased to hear of changes to league structures in Scotland. It's not the solution but it's part of the solution.

"I do think we need to change the system. It's a professional game so you have got to think of the commercial angles as well as the sporting angles.

"You put the football first but you cannot ignore that you need money to run the game."

The 58-year-old Scot admitted that it had "been difficult to keep the flag flying" for Scottish football as clubs and the national team failed in continental and international competition.

He said: "The performances have not been good.

"That's why it's so important for the game that Celtic have done so well in the Champions League.

"There are things being written about Scottish football for the first time in a few years.

"We are not regarded as serious contenders for any championships any longer.

"It's not just the top national team; the youth international teams have not qualified for the finals of tournaments for a number of years.

"However, the game is cyclical. A barometer is always the English game. A lot of our players are beginning to make their mark in English football and that suggests that the talent is of a level which gives us better hope for the future."

Taylor highlighted Frenchman Anthony Andreu, one of Livingston's goalscorers against Partick, to exemplify what he suggested was the rather parochial outlook shown by Scottish footballers.

Financial Fair Play at a glance

It is not until 2018 that clubs have to bring their annual losses below £8.8m

"Last season he was at Stade Nyonnais, the home team at Nyon [in Switzerland] where Uefa is based," he said.

"If you look around Europe I don't see Scottish players playing for teams in any other countries.

"We tend to be home-grown and we stay at home."

Taylor also spoke of the Financial Fair Play rules that are beginning to take effect across Europe as Uefa demands that clubs do not engage in reckless spending.

"The effort, we believe, is going to have a dampening effect on the whole transfer market and will allow clubs to breathe a bit more easily in terms of how difficult it is to make ends meet," he said.

"It's a serious thing for clubs who are continually spending beyond their means.

"It is not going to change the world overnight but it has started and it will change the face of football.

"It is deadly serious and it is applied from the top down.

"We don't want to see clubs in difficulties and clubs whose very existence is threatened."