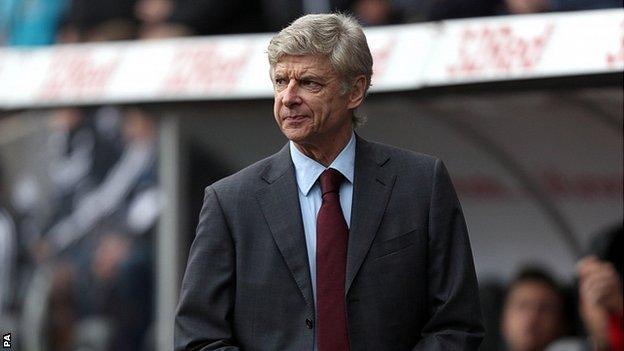 Arsenal boss Arsene Wenger says he is confident his side can handle their fixture congestion if they can avoid injuries and bolster their squad.

If Arsenal win their FA Cup replay with Swansea on 16 January, they will play seven games in 21 days.

Asked if his squad can cope, Wenger said: "Yes, if we have no injuries.

"Let's first keep the players we have and maybe add one or two. We lost [Marouane] Chamakh and [Johan] Djourou now, so there's some room."

Arsenal's 2-2 draw at the Liberty Stadium on Sunday means the Gunners will now play five Premier League games - including their postponed meeting with West Ham from Boxing Day - and potentially two FA Cup matches between 13 January and 2 February.

Wenger admitted the replay was an inconvenience, but was relieved to see his side remain in the FA Cup after falling behind to a 58th-minute goal from Swansea substitute Michu.

"I am frustrated because I wouldn't want [a replay] but if that's the choice between going out or staying in the hat then I would rather take the replay at the Emirates, and they have a lot of games too," he said.

"Today we had four players at home, and I didn't bring on Alex Oxlade-Chamberlain, Francis Coquelin or Tomas Rosicky.

"Abou Diaby is coming back and if we find one or two on the transfer market, then why not."

After falling behind to Michu's 15th goal of the season, Arsenal hit back with two goals in three minutes from Lukas Podolski and Kieran Gibbs.

But Arsenal's failure to deal with a late corner, giving the unmarked Danny Graham the time and space to lash home an 87th minute equaliser.

"We should have won this game," added Wenger. "I think in the second half we created many chances and suddenly found ourselves 1-0 down.

"Unfortunately I felt on the corner just before their goal, when we conceded it we lacked some calmness and focus.

"It is frustrating to concede a goal like this when we were first to the ball but didn't clear it, but we showed heart and it is good to repeat that."

Wenger believes referee Howard Webb should have awarded his team a penalty early in the second half when the score was goalless.

Aaron Ramsey tumbled over with Swansea right-back Dwight Tiendalli in attendance, but replays appeared to suggest Ramsey had clipped his own heels.

"It was a penalty and the referee saw it," said Wenger. "You know why he didn't give it? Because he thought the guy had not done it on purpose, [which] I think as well.

"It was accidental but he [Ramsey] didn't trip himself. He was caught clearly by the leg of the Swansea player. I don't know who it was. He had a hesitation, the referee, and in the end he didn't give it."