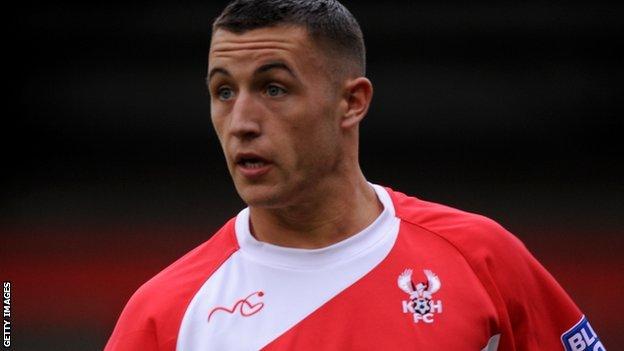 Mickey Demetriou gave Harriers the lead direct from a free-kick midway through the first half after Callum Gittings was brought down by Lee Beevers.

Lee Vaughan made it 2-0 to Steve Burr's side soon after with a low shot from inside the box.

Harriers substitute Sean Clancy was sent off in the second half after a foul on Beevers.

"I thought in the first half we never turned up. We were lethargic, off the pace and I have nothing good to say about our first-half performance.

"There were harsh words said at half-time and I thought we were the better team in the second half.

"It is disappointing and I think there are one or two still living off the Liverpool game."

"It's a good three points coming here to Mansfield and, yes, I am really pleased.

"I would have liked to have seen us get a third just to kill it off but we lost Sean [Clancy] late in the game.

"We had to defend well and the boys all around the park today were tremendous - every single one of them."