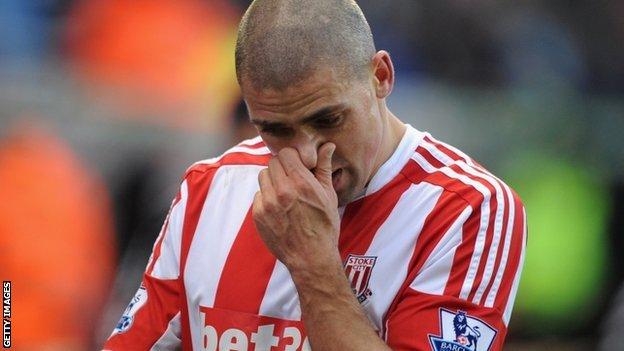 Jon Walters scored two own goals and missed a penalty as Chelsea thumped Stoke to end the Potters' 17-game home unbeaten run in the Premier League.

Walters headed a Cesar Azpilicueta cross into his own net just before half-time and repeated his unwanted trick from a Juan Mata corner.

Frank Lampard made it 3-0 from the spot after Mata was fouled and Eden Hazard smashed in a fourth from 30 yards out.

Walters' misery was completed when he blasted a late penalty against the bar.

The 29-year-old Republic of Ireland international has won plenty of plaudits for his play for the Potters this season but his 100th Premier League appearance turned into a memorable day for all the wrong reasons.

Chelsea move third in the table with what became a runaway victory but they were under the cosh for long spells early on and were grateful to assistant referee Sian Massey for correctly reversing a decision to award Stoke a penalty with the score at 1-0.

Referee Andre Marriner pointed to the spot when Azpilicueta slid in to bring down Matthew Etherington inside the area, but Massey had already flagged Etherington offside.

Double the agony for Walters

Stoke, who have never beaten Chelsea at the Britannia Stadium, had begun the game brightly, bombarding the visitors with balls into the box and seeing Kenwyne Jones fire narrowly wide.

Demba Ba was making his Premier League debut for Chelsea but, in the early stages, he was busier in his own area and twice had to hack clear.

Ba, preferred to Fernando Torres up front, got more involved at the other end of the pitch as the half progressed.

He provided the flick for Lampard to burst into the area and bring a reflex save from Asmir Begovic, then ran clear himself to force another fine stop.

Then came Walters first faux pas, which saw him send a bullet header past Begovic as he tried to beat Mata to a cross.

His second own goal came moments after Massey had denied Stoke a penalty. This time Walters beat Lampard to Mata's delivery and saw the ball bounce in.

Lampard's powerful spot-kick, from a penalty awarded when Robert Huth pushed Mata, left the home side with no way back.

Stoke's first home defeat in the league since February last year, and their heaviest at the Britannia Stadium since they returned to the top flight in 2008, was confirmed when Hazard span into space 30 yards from goal and unleashed an unstoppable shot into the top corner.

There was more good news for Chelsea when John Terry came off the bench with 10 minutes left for his first appearance in two months, but there was to be no happy ending for Walters.

He was fouled by Terry inside the area with only seconds to go and stepped up to take the spot-kick himself, only to slam it against the bar.