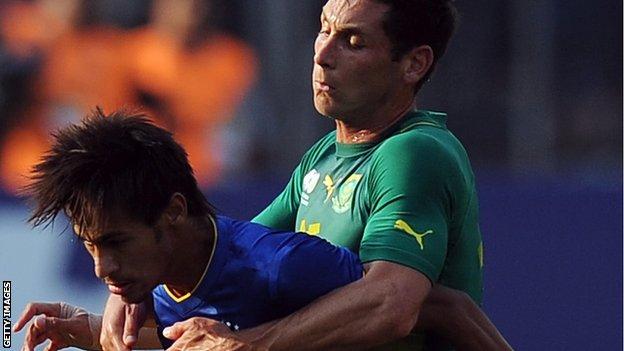 South Africa's Dean Furman says representing the host country at the 2013 Africa Cup of Nations will be a major highlight in his career.

Many managers, including Manchester City boss Roberto Mancini, are unhappy with the timing of the competition.

But the Oldham captain said he

English-based players at the 2013 Africa Cup of Nations

24 English-based players have been named in provisional squads ahead of the tournament, which starts in Johannesburg on 19 January:

All squads must be finalised by 9 January

"There wasn't too much of a decision in my eyes - if I made the squad, I really wanted to be there," Furman, who has five caps, told BBC Radio Manchester.

The tournament starts on 19 January, when Gordon Igesund's side face Cape Verde at Soccer City in Johannesburg.

Manchester City will lose three players - including the influential Yaya Toure - while the competition is in progress and, speaking in November, Mancini was worried that Toure, his brother Kolo and Abdul Razak for the Premier League champions.

And until Monday, just two days before each of the 23-man squads must be finalised.

The competition runs until 10 February.

Furman, 24, can understand why some players are caught in a dilemma between club and country.

"You see it every year," he continued. "Players all over are missing games. That is a difficulty, but it's very hard to turn down.

and representing my nation in a massive tournament will be one of the pinnacles of my career."

Midfielder Furman, who flew to South Africa shortly after the on Saturday, will be absent as Oldham look to drag themselves clear of the League One relegation zone.

But while he will be keeping a close eye on events at Boundary Park, Furman's main concern will be on his country, as they aim to win the Africa Cup of Nations for a second time.

As well as Cape Verde, the Bafana Bafana have been drawn alongside Angola and Morocco in Group A.

"We've got a tricky group and we hope we can get through that," said Furman.

"After that, it's knockout football and we all know that anything can happen.

"It will be an incredible tournament to play in. We'll have the nation's backing and hopefully we can give them a team to be proud of."