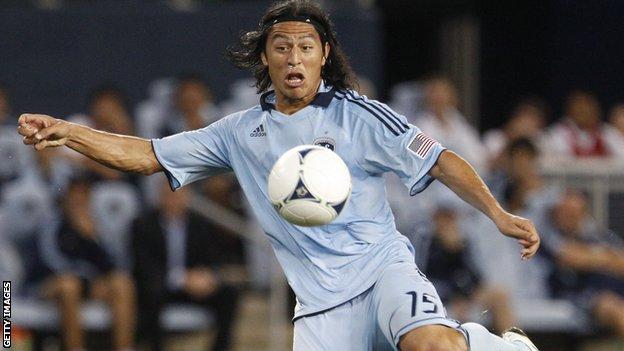 The 26-year-old, who competed for his country at London 2012, has joined on a free transfer from MLS side Sporting Kansas City.

Espinoza, who can play in defence or midfield, is eligible to make his debut in Saturday's FA Cup tie against Bournemouth at the DW Stadium.

He becomes the fourth Honduran to play for Wigan in the Premier League.

"I am just so happy to finally be here," he said. "It's taken a while to get all the paperwork done but now I can concentrate on fighting for my place and helping the team."

He is manager Roberto Martinez's second signing of the January window following the arrival of Angelo Henriquez from Manchester United earlier this week.

Martinez said: "It is great to finally welcome Roger to Wigan.

"Usually players would have more time preparing for their debut and getting used to their new team-mates, but Roger is so desperate to play as soon as he can that we hope to see him on the pitch on Saturday.

"He is an excellent talent and every time we have seen him play he has shown the desire that as a club we like to see from our players."

Espinoza scored for Honduras against Brazil in a 3-2 defeat at the quarter-final stage of the London 2012 Olympics.

A United States citizen, Espinoza opted to play for the country of his birth and has 25 full caps in addition to his Olympic appearances. He follows Hendry Thomas, Wilson Palacios and Figueroa as Hondurans to join Wigan.