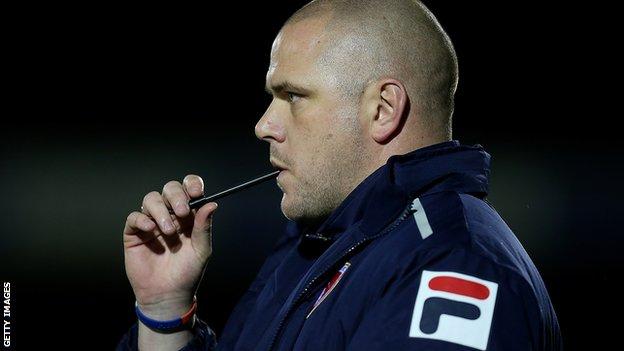 Morecambe are offering free entry to all supporters for their game against Dagenham & Redbridge on Tuesday.

Boss Jim Bentley has at the Globe Arena, admitting a lack of funds have left him

"It's a chance to get the community behind the team and see if we can generate some atmosphere," Bentley told BBC Radio Lancashire.

The situation that the club's in is not ideal. Everyone's feeling the pinch and attendances haven't been what we predicted.

"If we can get three points and play well, hopefully they'll come back as paying customers."

A crowd of 3,635, Morecambe's highest home gate of the season, watched the Shrimps on New Year's Day.

But Bentley says the financial climate has left many clubs, particularly in the lower leagues, struggling to attract people to matches.

He added: "The situation that the club's in is not ideal. Everyone's feeling the pinch and attendances haven't been what we predicted.

"We're not in a position to go out and get players. We've got to work with what we've got and we've got a squad that will give their all.

"It will be great if we can get a good number (of fans) in and, as I say, they can come back as paying customers. It's the town's football club and we need more and more people to back it."

Supporters can turn up from 18:30 GMT with turnstile entry to home terraces. Tickets for the main stand are being given away on a first come, first served basis from the club shop or ticket office.