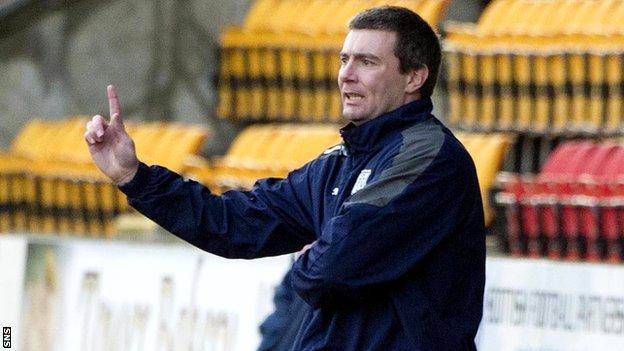 Dundee say they will "redouble efforts with the manager to try and add more quality to the squad" as they bid to stay in the Scottish Premier League.

With Dundee adrift at the foot of the table, the board met to discuss their continued backing for boss Barry Smith.

"The manager, chief executive and the board of directors are confident we can still put on a good show in this division," read a club statement.

"We expect that the manager and the team will continue working hard."

"While the season has obviously not gone as well as we would have hoped for on the field and our injury list has been horrendous, there is no magic wand that can be waved to fix everything," added the statement.

"In all reality, we were always going to find it tough against the established SPL teams and those who knew what they were preparing for in the summer.

"The CEO [Scot Gardiner] and the manager have been working on targets to bring into Dens for the second half of the season. We hope to see the fruits of this hard work at sometime in January.

"Media speculation over the last few days has caused great uncertainty at the club and this has been very unfair to the manager, the fans and to everyone involved at Dundee FC."

Smith, 38, was appointed manager of the Dens Park club in October 2010.

Dundee finished 24 points behind First Division champions Ross County last season but were invited to take the place of Rangers in the top flight.

The club statement added: "This is a season that was always going to be difficult considering the extremely unusual circumstances that led to us being elevated into the SPL.

"We had already prepared to play and hopefully win Division One by signing a brand new squad early in the summer of 2012 and there was no certainty at any time that we were going to be named Club 12.

"Added to this was the uncertainty over media contracts and therefore funding, even if we were the nominated club to go into the SPL.

"On 3 August, one day before the league started, we were officially admitted into the SPL.

"We then only had something like three weeks of the transfer window left to try and add to our squad and bring it up to SPL standard both in numbers and quality. A difficult job it is fair to say."