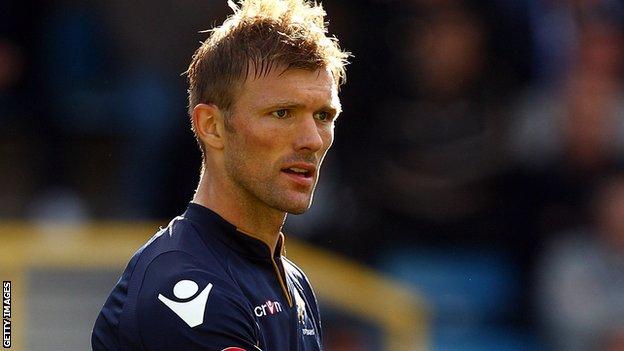 Centre-back Darren Ward has completed a free transfer to Swindon Town from Millwall on an 18-month deal.

The 34-year-old arrived on loan in August and has made 19 appearances.

It will be fantastic if we can bring another, we won't say two, even one extra player

"We are positive we can extend for a few weeks and see if we can keep them for the season," he told BBC Wiltshire.

"If they tell me you have enough money to keep those three I will jump, dance and be the most happy manager in the world."

Swindon chairman Sir William Patey revealed this week there would be no money for the club to spend in the January transfer window.

Even if the three loan deals are extended manager Di Canio is still looking to add to the Robins squad despite the financial limitations.

"We are working hard because you know the situation, we can't count about some help," he added.

"It will be fantastic also on top of this if we can bring another, we won't say two, even one extra player. To be honest I can't hope, I have to be realistic."

BBC Wiltshire has learned that 33-year-old striker Paul Benson has turned down a move to League Two side Bradford City, and approaches have been made for midfielders Luke Rooney, Lee Cox and Oliver Risser.