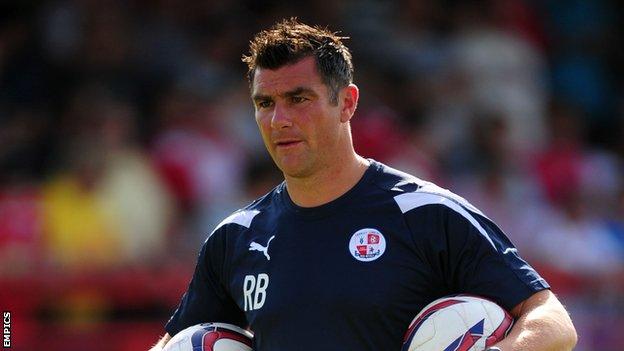 Crawley boss Richie Barker says he will be enlisting the help of director of football Steve Coppell as his side prepare to host Reading in the FA Cup.

Coppell left the Royals in 2009 after five and a half years in charge.

Barker told BBC Sussex: "Steve doesn't talk about anything if you don't ask him. I will be picking his brains as much as I can.

"He will be able to give me the best piece of information and the best dossier on every player at the club."

He continued: "It is useful because he still goes to a lot of the games.

"If a game is on on a Sunday, he will go and watch Reading play because he has got a lot of friends there.

"He knows every player right down to the development squad."

I don't really see how someone so far down the pecking order can ever get to work at Premier League level. Brian McDermott is one of the ones who has bucked that trend

McDermott began his managerial career at Slough Town in 1996 and had a spell in charge at Woking before joining Reading as chief scout in 2000.

He became caretaker manager of the Berkshire side after the departure of Brendan Rodgers in December 2009 and was handed the job on a permanent basis the following January.

"He was Steve's chief scout when Steve was there, so they are extremely close.

"From what I gather, even when he was chief scout he was out on the training ground.

"He was constantly learning and you can't have any more admiration for him than what I have got, in terms of the fact he worked his way up to eventually become a Premier League manager," said Barker.

"I sometimes sit back as a young manager and think that is not a possibility for me.

"If you have only played in the lower levels, I don't really see how someone so far down the pecking order can ever get to work at Premier League level.

"Brian is one of the ones who has bucked that trend.

"I need to try and look at the way he did it as much as possible and use him as motivation."

Crawley have reached the fifth round of the FA Cup in each of the past two seasons, pulling off six upsets in the process.

This year they have beaten two non-league sides - Metropolitan Police and Chelmsford City - en route to the third round.

The two sides meet at the Broadfield Stadium on Saturday and the West Sussex club are expecting a possible sell-out crowd of almost 6,000, which will include 1,400 away supporters.

Barker hopes the occasion will lead to more supporters becoming regulars as the club look to sustain themselves in the third tier of English football.

"We all know what's at stake - a place in the fourth round and maybe an opportunity for an even bigger tie away from home.

"As important as the result is the fact we will probably have the biggest crowd in the club's history.

"At some point maybe, hopefully, these people will become more regular supporters and we can start to up our league gate."