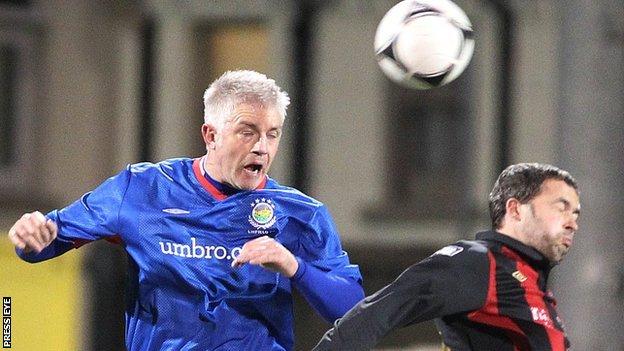 Murphy was banned for the win over Cliftonville which leaves the champions 10 points behind the pacesetting Reds, who take on Glentoran on Monday night.

Coleraine have slipped to fifth place and new signing Jamie Tomelty is unavailable for the Windsor Park game.

Joel Taggart and Alan Paterson are on commentary at Windsor Park as champions Linfield take on Coleraine.

There will be regular updates from the other three matches.

There's regular updates from the other three matches.rk.

Striker Timmy Adamson remains sidelined with an ankle injury as the Crues seek to close the gap on their north Belfast rivals to three points.

"We know the situation at the top end of the league but we simply just concentrate on the next game in front of us," said Seaview boss Stephen Baxter.

"It really is a case of one game at a time and outside matters will take care of themselves.

"We have been relatively fortunate with injuries so far this season but we will have five players suspended in the next few weeks and that is a concern."

Murray and Breen were suspended for Tuesday's 1-0 defeat at Crusaders, in which defender O'Hara was sent-off with six minutes left.

Lisburn Distillery's relegation fears increased after the 2-0 defeat by Ballinamallard left them four points adrift at the bottom.

The struggling Whites host a Dungannon Swift side which has Johnny Topley and Terry Fitzpatrick avaialble again after suspension.