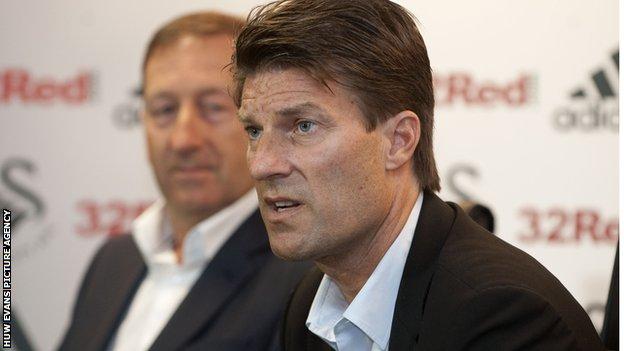 Chairman Huw Jenkins says manager Michael Laudrup will be given money to sign new players during the January transfer window.

Swansea are currently ninth in the Premier League and have big cup ties coming up this month.

Jenkins says Swansea need to strengthen their squad if they are to build on their success so far this season.

"We're looking to get a strong healthy squad and move forward from January," he said.

"There will be one or two players coming in just to make sure we've got enough bodies between now and May.

"We've got a lot of games coming up, a lot of competitions we're still involved in and we've got to make sure we're competitive in every game we play."

Swansea host Arsenal in the FA Cup third round on Sunday before travelling to Chelsea next Wednesday for the first leg of their Capital One Cup semi-final.

Michael Laudrup's side play Everton and Stoke City before Chelsea visit the Liberty Stadium for the second leg on 23 January.

Although keen to strengthen Swansea's squad during the transfer window, Jenkins admits fringe players could be allowed to leave the Liberty Stadium this month.

"There are a few players not really playing regularly and nobody wants players around that are not quite happy when they're not playing," Jenkins added.

"I think Michael is going to speak to them over the next week or so. They will have an opportunity to give their views and see where that takes them."