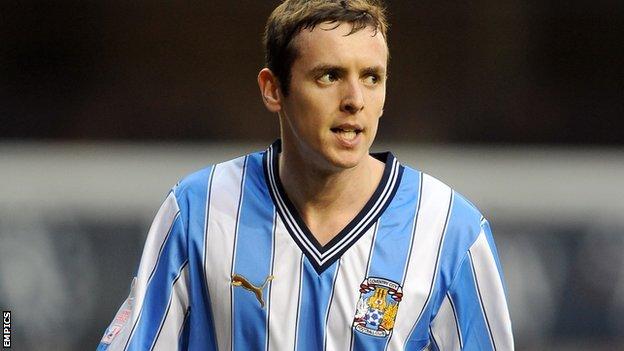 Coventry City have extended the stay of Sunderland left-back Blair Adams for a further week, enabling him to play in Thursday night's Johnstone's Paint Trophy semi-final against Preston.

The 21-year-old, who has made 12 appearances for the Sky Blues since arriving in November, is now signed up until Wednesday, 16 January.

That enables him to play in the JPT northern section semi-final.

He can also play at Carlisle on Sunday and at home to Tranmere next week.

His loan will now expire after City's home date with the current League One leaders next Wednesday night (19:45 GMT).

Adams, who is out of contract at the Stadium of Light at the end of the season, was due to play his last game at Tottenham in the FA Cup on Saturday.

Meanwhile, Coventry boss Mark Robins may look to send out strikers Cody McDonald and Roy O'Donovan on loan in a bid to get them some match fitness.

McDonald has not started a game since the home defeat by Scunthorpe in mid-November, while O'Donovan has hardly featured at all, his only start coming in the FA Cup victory over Morecambe in early December.

The 21-year-old younger brother of Sunderland defender Wes Brown, signed by Andy Thorn back in July, was a regular over the early weeks of the season.

But, having played in Mark Robins' first three games in charge, he has not featured since the 1-0 victory at Oldham in late September - Robins' first win.