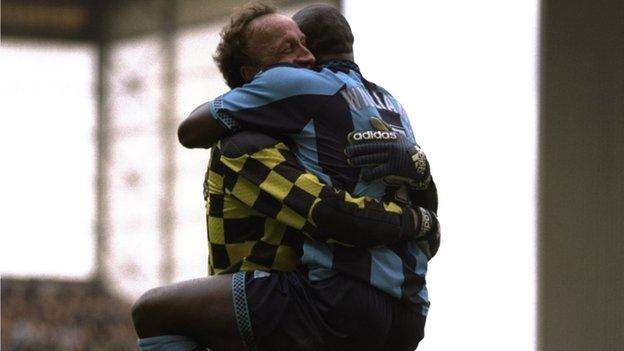 It is now more than 25 years since the man they call Big Oggy was part of the Sky Blues side which helped win the club's first major domestic honour, keeping goal in their 3-2 1987 FA Cup final win over Spurs.

The away fan's verdict...

I was a penniless student, who should have been studying for my upcoming finals but scraped enough cash to get the bus to Victoria, where I encountered some vocal Sunderland fans who were confident about winning at Wimbledon.

The match programme recalled the 10-year anniversary of our classic 1987 FA Cup Final and the huge turnout in the away end sang 'There's Only One Gary Mabbutt' in reference to the fact his own-goal won us the Cup.

We started brightly and Dion Dublin headed us into the lead. The celebrations were wild. I remember we were bundled over by some drunk fans. Paul Williams volleyed a second, which led to more mayhem. Spurs then pulled one back and the second half was incredibly nervy. I spent most of it focused on Radio 5.

We then heard that Middlesbrough had failed to win at Leeds and Wimbledon had beaten Sunderland 1-0 and we had 15 minutes to hold on, 15 minutes of chain-smoking and nail-biting. It was agony. Our entire outfield were completely exhausted, leaving Big Oggy exposed but he magnificently saved close-range efforts from Teddy Sheringham and co to cement his place as the greatest-ever Coventry City player.

The away end erupted at the final whistle. I saw an old chap in tears. He'd seen many memorable escapes before but never quite like this. I gave him a massive hug as our players ran towards us and celebrated. We'd survived by a single point. Outside the ground many Spurs fans wished us well which was a lovely gesture. And on my way home via Victoria I met the same Sunderland fans who this time were tearful and quiet.

But Ogrizovic had an even bigger individual part to play for the Sky Blues when he starred in their almost equally joyous, but less well recalled 2-1 final-day-of-the-season victory over Spurs in May 1997.

Admittedly, this was part of a run of four wins in five seasons at White Hart Lane.

But, even by the standards of Coventry's many narrow escapes in their 34 seasons in the top flight, having needed to win at White Hart Lane and hope two other results went their way, this was the against-all-odds performance of them all. The one that kept them in the Premier League, well, for another four years, at least.

And, when he returns for Saturday's FA Cup third round clash with Spurs, Coventry's long-serving goalkeeping coach will still be the proudest man in the stadium.

But, ahead of Coventry's first return to White Hart Lane since they were relegated from the Premier League in 2001 (the season after he retired), although acknowledging that their FA Cup victory was the pinnacle of his career, Ogrizovic is just as happy to recall that euphoric day a decade later.

"Take the FA Cup final out and that was the best day I had in football," he told BBC Coventry & Warwickshire.

"People had written us off and we had to rely on a number of other results.

"We started 20 minutes later than everyone else, so the results had filtered through and the last 15 minutes were precarious."

The ever-modest Oggy might have neglected to mention it, but the fact that Coventry made it to the final whistle, courtesy of goals from Dion Dublin and Paul Williams, was largely down to the 6ft 5in gentle giant, who made a a string of gallant saves.

"It was one of those days when the Coventry fans were unbelievable," recalls the inspired Ogrizovic. "It felt like a home game.

"They are very special memories and it will be nice to go back to White Hart Lane.

"It's a proper football stadium with a good atmosphere. The players will love it out there and the fans will love to revisit it as well."

"Saturday's a great day out for the players, for the staff and for the families.

"But most of all it's for the supporters, who have been absolutely magnificent this year."

After relegation from the top flight, followed by 11 years of frustration in English football's second tier, this season in League One has certainly been a rollercoaster ride for the Coventry faithful.

After a disappointing start of three straight draws triggered the end of Andy Thorn's reign as manager, things then went from bad to worse under caretaker boss Richard Shaw.

Coventry lost their next four league games, culminating in an embarrassing 4-1 thumping at Shrewsbury in mid-September.

But Mark Robins was appointed manager the next day and they have rarely looked back since, with their run of just four defeats in 22 games having taken them to the FA Cup third round, the regional semi-finals of the Johnstone's Paint Trophy and 11th place in League One - just five points shy of a play-off spot.

And, perhaps ominously for Spurs, they have been particularly impressive on their travels, having won a club record six away games on the trot, knocking in 19 goals in the process.

And, in homage to the events of 26 years ago, they will even turn up wearing their 1987 Wembley strip of sky blue and white stripes and navy shorts.

"It's a nice little touch, that is," admits Ogrizovic.

"I don't think people will stop talking about the Cup win. The experiences will be passed down generations.

"I speak to loads of young kids who weren't born when we were at Wembley that day but most of them know about it or have been told about it.

"I've said this many times and I say it because it's true, there is virtually not a day goes by if I'm walking around that someone doesn't come and remind me and tell me what they were doing that day in 1987."