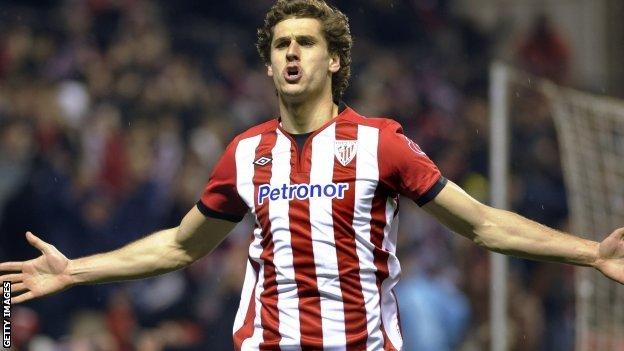 Juventus have taken a big step towards signing Fernando Llorente on a free transfer next summer.

The Italian champions are to hold talks with the 27-year-old Spain striker, who has scored 115 goals in 317 appearances over nine seasons for the Basque club.

"Juventus informed Athletic that they will begin negotiations with the player to incorporate him into their squad," Bilbao said in a statement.

His contract expires on 30 June and he has rejected the offer of a new deal.

Both Liverpool and Arsenal have been linked with the forward.

Llorente scored in both legs of the Europa League last-16 tie against Manchester United and helped Bilbao reach the final of the competition with a goal in the second leg of the semi-final tie against Sporting Lisbon.

Llorente, who is no longer considered a first-choice striker with the La Liga club, was involved in a training ground disagreement with Bilbao coach Marcelo Bielsa in October.

He has also suffered from jeers from his own fans this season following his decision to leave the club.

The 6ft 4in striker was in Spain's squad for Euro 2012, but did not feature during the tournament as the Spaniards won the title.