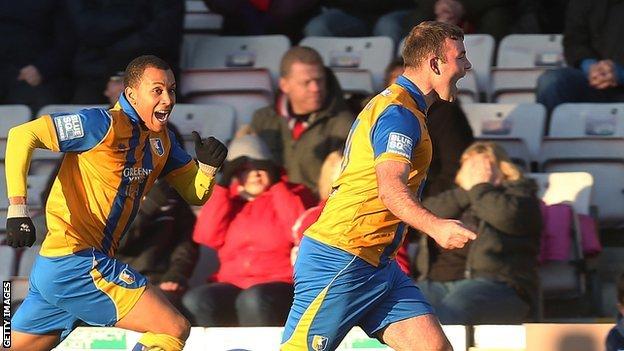 When substitute Matt Rhead smashed through a crowd of players to head in a 93rd-minute equaliser in Mansfield's Town's FA Cup second-round tie against Lincoln, he had no idea quite how significant it would turn out to be.

Just over a month later, having negotiated a tricky replay against the Imps, the Stags are readying themselves for the dream tie against seven-time Cup winners Liverpool.

Rhead, a burly battering ram of a centre-forward, only embarked on a full-time football career in May. It was just days before his 28th birthday and, with a "really good job" and a young family, it was far from an easy call.

Rhead was born in Stoke, began his career at Kidsgrove Athletic and has been a regular goalscorer at non-league level throughout his career.

After three seasons with the Badgers - which included a run to the FA Cup third round in 2009 and helping the club climb to the Blue Square Bet North - he moved to Corby and then joined Mansfield on a short-term deal in January 2012.

Rhead, who was strongly linked with a move to League One sides while at Corby, finally started a full-time football career with the Stags when he signed a new contract in May just days before his 28th birthday.

Rhead is a huge Stoke City fan and still goes when he can. He was at Wembley to see the Potters in the 2011 FA Cup final against Manchester City.

But the Stoke-born Potters fan is in no doubt he made the right choice - and not just because of Sunday's home game against Liverpool.

"It was a gamble but I didn't want to regret it, even though I didn't know how long it will last," Rhead told BBC East Midlands Sport.

"I was working for JCB as a team leader and I have a daughter and another daughter on the way in March so it was tough. But it was definitely the right decision; I am loving being full-time.

"So many people dream of playing football for a job and I just didn't want to turn down the chance. Playing Liverpool really is once-in-a-lifetime stuff and hopefully we can can pinch something."

Rhead had only been on the pitch against Lincoln for 10 minutes when he outmuscled a clutch of players, left one of his team-mates in a crumpled heap on the floor, and earned his side a 3-3 draw in that thrilling game at Sincil Bank.

And as Stags manager Paul Cox's 'Go-To' man if Plan A isn't working, there is more than a decent chance the 6ft 4in forward will get another opportunity from the bench when the Merseysiders visit the One Call Stadium.

But Rhead admits the transition from part-time to full-time footballer has not been the easiest, and he has struggled to win a regular place.

"It's been difficult to be fair - much harder than I thought it would be," he admitted. "I was only used to training twice a week but I have really enjoyed it."

He has only started 10 games this season but has made 18 appearances in total, scoring four goals. However Rhead's considerable aerial ability and sheer physical presence make him a vital part of the Stags squad.

Top scorer Matt Green and former Celtic striker Ben Hutchinson are likely to start up front against the Reds, with Jake Speight also in the frame.

But Rhead's contribution to Town's Cup run has already been massive. Not only did his late goal against Lincoln keep them in the competition, but he played a key role helping out his defenders when his side were really under pressure in the replay.

Having had a few months tasting life as a full-time pro, Rhead, a well-known figure and regular scorer around the non-league scene, is now eager to push on.

"I bring something different when I come on but I seem to be getting overlooked as a starter at the minute," he said. "But my chance will come. Everyone wants to play but there are good players who are not even getting on the bench. Although it's frustrating, it could be worse. The manager knows what I can do."

Cox certainly does. He had Rhead for three successful seasons at Eastwood Town, where the striker helped the club win promotions and reach the FA Cup third round in 2009.

Under Cox, the Stags have built up a reputation in non-league circles as a long-ball team. And although, like Rhead's boyhood team Stoke, it is by no means always accurate, they certainly tend to favour a more direct approach.

The Stags will look to play on the deck when possible, but they make full use of Exodus Geohaghon's mammoth long throw and get the ball forward quickly to nippy front men.

"Matt's performances have improved this season since he's gone full-time. He's excellent in the air, very dangerous from long throws and he got the winner direct from a long throw against Forest Green. I would think Matt Green and Ben Hutchinson will start, although Paul Cox could play the team that beat Alfreton. Matt normally comes off the bench if the team are losing. He's a real threat in the air and tends to win about 80% of the headers he has a chance of winning."

"We're not too different to Stoke in some ways," Rhead added. "If we get the ball in their box we'll score goals. We have good players. We are effective at turning teams around and creating chances."

Liverpool's recent 3-1 defeat at the hands of Stoke provides inspiration, with one of the goals coming from a trademark long throw.

"Teams get tired in last 20 minutes and if I come on, the boss tells me to do what I do and bring something different," Rhead added.

"The FA Cup is still magical for lower division sides. We believe that we have a chance. We wouldn't turn up if we didn't think so. They might rest one or two and not fancy it.

"Everyone is buzzing and if we can stay in the game I might get the chance."

Daniel Agger, Martin Skrtel or whoever lines up at the back for Liverpool may not find Rhead's arrival particularly enjoyable if the game is tight, the wind is howling and the pitch is far from perfect.