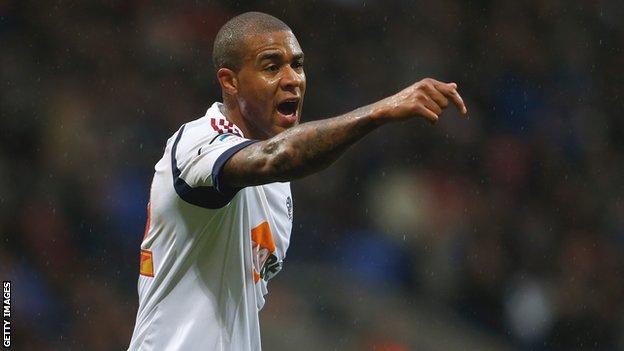 Defender Zat Knight hopes Bolton can stop their slump in form when they face Sunderland in the FA Cup third round.

But he insisted Wanderers will not view the tie as a chance to prove they can still compete in the Premier League, following their relegation in May.

"There's no point beating Sunderland and then losing to Millwall or Crystal Palace," he told BBC Radio Manchester.

"There's no point pretending we're something we're not - we're a Championship team."

Bolton want to bounce back from a disappointing festive period, which yielded just three points from four league matches, and Knight expects manager Dougie Freedman to make alterations to the starting line-up after the loss at Leeds on New Year's Day, their second successive defeat.

"It might give the manager a few options," added the former Fulham and Aston Villa centre-back.

"Maybe a few boys that have been itching to start can come in. If they do put in a good performance and we do go through, we can push on in the league."

Although their league form has dipped going into Saturday's third-round tie at the Reebok Stadium, Bolton can take heart from their recent FA Cup record.

Wanderers have progressed to at least the last 16 in each of the last three seasons, and were semi-finalists in 2011 under Owen Coyle.

But the last time Bolton were beaten in the third round of the competition was in January 2009 - by Sunderland.