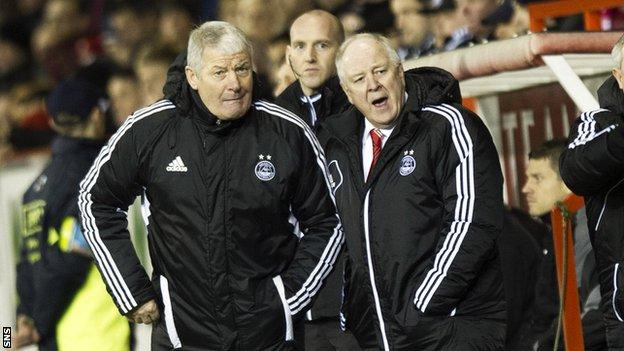 Aberdeen manager Craig Brown voiced his frustration over not being able to put Dundee United to the sword at Pittodrie.

Despite early domination, the Dons had to fight back to secure a point.

"The game should've been out of sight in the first 15 minutes," said Brown. "We had four great chances to score and only took one of them.

"When you miss chances like that and then give away goals as we did, you give a life-line to the opposition."

Scott Vernon put the home side ahead before Gavin Gunning's scrambled equaliser.

Jamie Langfield then fumbled a Johnny Russell cross to score an own goal that put United in front at the break.

"It was a bad goalkeeping error, there's no getting away from that and Jamie held up his hand and admitted that," Brown told BBC Scotland.

"The only trouble is that when an outfield player makes a mistake, sometimes a very serious one, it doesn't always result in a goal.

"When a goalkeeper makes a mistake, it results in a goal.

"There were mistakes made by other players out there and no player can't point his finger and blame the goalkeeper."

Once again, it was Niall McGinn who turned out to be Aberdeen's hero, equalising from an impressive free-kick in the second half.

The Irishman now has 14 goals for the season.

"He hasn't scored from a penalty. The other scorers, guys like [Leigh] Griffiths have got a number of penalties," said Brown.

"I think in open play I read that Niall is the leading scorer.

"He deserves credit for playing in an unfamiliar role initially - it's familiar to him now.

"He's electric in front of goal. No praise is high enough for Niall McGinn."

Brown is now hoping the two week break from Scottish Premier League action will allow him to get players like Rob Milsom, Stephen Hughes, Gary Naysmith and Isaac Osbourne back to fitness.

"With the break, we'll get some players back and there'll be keen competition for places in the team," he said.

"I'm supremely optimistic about what can happen in January and February for Aberdeen."