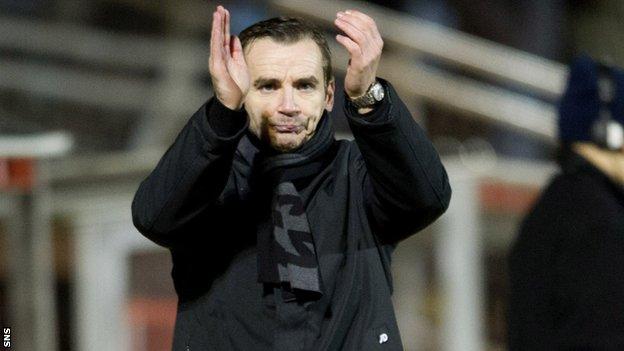 St Mirren manager Danny Lennon praised the performance of his players in but felt fans deserved more than spot-kicks.

The Buddies recovered from a first-half Killie penalty to score one of their own in the second half.

"I thought it was a great spectacle for Scottish football," said Lennon.

"For the opportunities we created, it was disappointing that we didn't get anything from open play for our efforts."

Liam Kelly converted for Killie on five minutes following Jim Goodwin's challenge on Paul Heffernan, then Paul McGowan levelled from the spot on 68 minutes after Dougie Imrie had been felled by Mark O'Hara.

We're now starting to hit a bit of form, and that coincides with getting key players back like McGowan

Kilmarnock goalkeeper Cammy Bell pulled off a string of saves to keep is side in the game, and Lennon also praised the attitude of the visitors during the blustery conditions.

"Both sets of players and fans created a great atmosphere," said Lennon. "We were delighted to come back from 1-0. Cammy Bell has been in terrific form.

"I thought both sets of players tried to get the ball down. Kilmarnock, for me, don't get enough credit in terms of the way they play.

"They have more points on the board, more goals, they've conceded less. They defended very well. I've got to give [Kilmarnock manager] Kenny [Shiels] and his players a great deal of credit for what they brought to the game."

Looking ahead to the rest of the season and 2013, Lennon said he was pleased to see his players increasing their efforts and pushing up from the lower half of the table.

And he hinted at possible improvements to his squad in the January transfer window.

"We're now starting to hit a bit of form, and that coincides with getting key players back like McGowan, so that's something we want to continue to build upon," added Lennon.

"But the key ingredient to our success is hard work. If we can continue that between now and the end of May, then I believe the end of the season will be a positive one for us.

"But we selected one or two there and we won't panic and go out and bring something that's not going to improve our help the group."