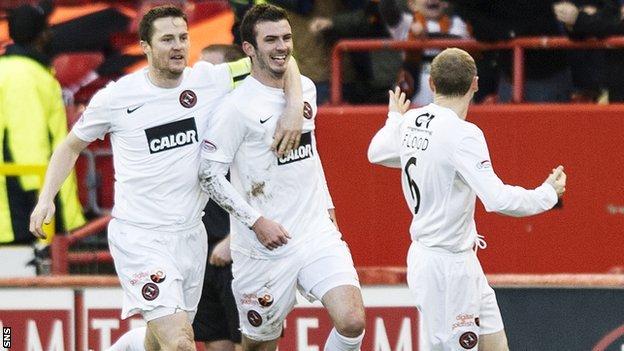 Dundee United manager Peter Houston hopes to bring in one player during the January transfer window and is eager to avoid departures.

Milos Lacny has returned to Sparta Prague following a loan spell and Houston will seek a replacement.

"Lacny's away back to his parent club so hopefully that releases money to get a player in," Houston said after at Pittodrie.

"Any more than that? I'm not sure. We can't afford to let anybody out."

United fell behind against Aberdeen when Scott Vernon netted but Gavin Gunning's header and Jamie Langfield's own goal put the visitors in front before half-time.

However, Niall McGinn's free-kick secured a draw for the Dons.

Houston fielded youngsters John Souttar and Darren Petrie and lined up with striker Jon Daly in defence in a makeshift side.

"I'm disappointed we didn't win the match," Houston told BBC Scotland. "The free-kick that led to Aberdeen equalising, I didn't think it was a foul. Indeed, I thought it was a foul our way.

"Jon Daly headered the ball and McGinn leaned into him with his back-side.

"We bled a 16-year-old and a 17-year-old into the team and it was tough for them playing against a team who should, with the resources, finish second [in the SPL]. It bears well for the future because they're talented players.

"It was end-to-end stuff at times and I thought we were very dangerous on the counter-attack.

"I've got to mention Willo Flood, John Rankin and Richie Ryan, who hasn't played for a while. In the middle of the park, they battled away.

"Our front two of [Stuart] Armstrong and [Johnny] Russell were excellent.

"It was a good team performance, I can't say that I had many failures."

And Houston believes Daly could extend his career by moving back into defence on a more permanent basis.

"I think in a year or two he will want to be a centre-half," added Houston.

"When you're up front, you have to do a wee bit more running, you have to be a bit sharper and, as the old legs go a wee bit, you don't get quite as sharp.

"Jon Daly reads the game well and he never got caught in positions where he was done by pace from Niall McGinn. His positioning was good and certainly his heading ability's good as well."