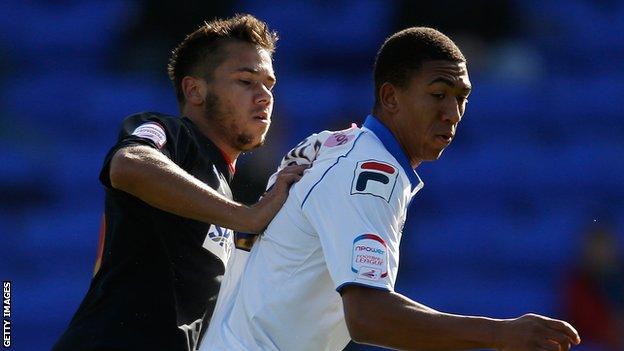 Midfielder Liam Palmer has signed a new two-and-a-half year contract with Sheffield Wednesday and extended his loan at League One leaders Tranmere.

ended after the but Palmer will now stay at Prenton Park for the remainder of the campaign.

"He has been a model professional and a credit to Sheffield Wednesday," said Tranmere manager Ronnie Moore.

I definitely see my long-term future at Sheffield Wednesday, but I'm really looking forward to helping Tranmere in their push for promotion

"He's formed a great partnership with [captain] James Wallace and more recently Max Power in the centre of our midfield and he has improved as the season has gone on," Moore told the club website.

"I think there is more to come from him too. He's not scored yet but I think he has goals in his game. I'd like to thank Sheffield Wednesday and [Wednesday manager] Dave Jones for

The loan move is subject to the necessary paperwork being completed.

Speaking to Sheffield Wednesday's official website, Palmer added: "It's been a great learning curve for me personally and it feels like I've come a long way since starting out at the Wednesday academy.

"It goes to show it's there for the taking if you want it and work hard enough for it.

"I definitely see my long-term future at Sheffield Wednesday, but I'm really looking forward to helping Tranmere in their push for promotion."