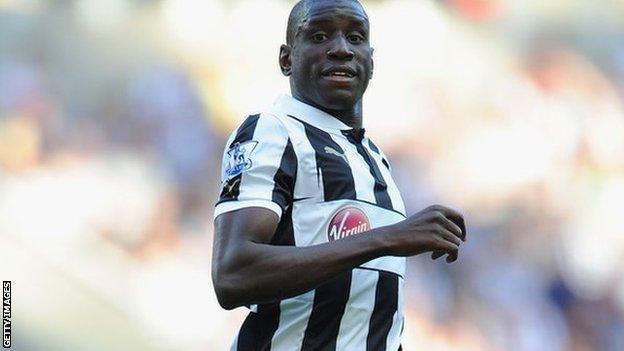 Ba, 27, has been given permission to speak to Chelsea and will miss Wednesday's game against Everton.

It is believed his contract contains a clause which allows him to speak to other clubs in the event of a £7m bid.

The Senegalese, who joined Newcastle from West Ham in June 2011, is currently joint-second top scorer in the Premier League with 13 goals.

Newcastle have attempted to negotiate a new deal with the Senegal international in recent months, which would remove the clause, but it became active on 1 January.

Earlier this week, Magpies boss Alan Pardew was hopeful Ba would stay but criticised the network of people representing the player.

However he is now resigned to losing Ba. He told Sky Sports: "It's done, he will go to Chelsea with our blessing. He has done fantastically for us, it's a big club, good luck to him.

"For us, it's not a bad thing because of all the uncertainty of whether he was going to stay is now done. We can move on, we're a massive club here. This club is bigger than any player for sure. In some respects, I'm pleased."

After Liverpool signed Chelsea striker Daniel Sturridge, Ba could be a replacement for the 23-year-old England striker at Stamford Bridge.

France-born Ba had trials at Barnsley and a spell at Watford but failed to land a contract and went back to France where he had stints at Rouen and Mouscron before moving to Hoffenheim in 2007.

Newcastle have scored 26 goals this season, with Demba Ba scoring half of them.

The German club agreed to let him move to Stoke in a reported £6m deal in January 2011. However, after Ba failed a medical, the striker instead moved to West Ham later that month.

The forward scored seven goals in 13 games, but invoked a release clause in his contract after the Hammers were relegated.

Newcastle needed a player to replace Andy Carroll, who had joined Liverpool for £35m, and signed Ba on a three-year deal in June 2011.

The Senegalese player scored 16 goals during his first full season as Newcastle finished fifth and qualified for the Europa League.

He is the club's top scorer this season and his departure would leave just Papiss Cisse and Shola Ameobi as the only senior strikers at the club. The pair have scored eight goals between them during the current campaign.