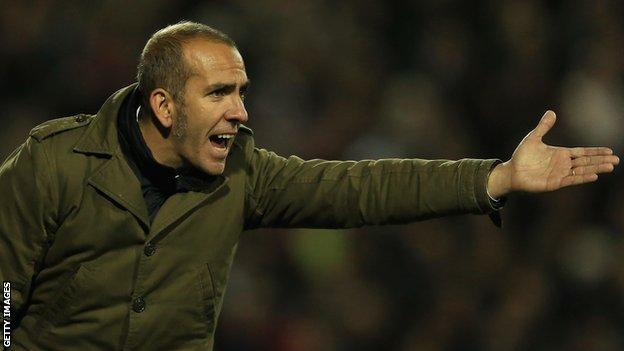 Swindon chairman Sir William Patey has revealed there will be no money to enable Paolo di Canio to strengthen his squad during the transfer window.

The Robins, currently fifth in League One, are now free of a transfer embargo that was imposed last October after they overspent on wages and fees.

However, Patey told BBC Wiltshire: "We don't have money to spend on players, that is the reality,"

"We shouldn't be expecting big name signings or anything."

Manager Di Canio, who was known to have a close working relationship with Patey's predecessor, Jeremy Wray, the man who brought him to the County Ground, has previously spoken out about his unhappiness with the board's statement that they would think about curbing spending and "due diligence" when making future signings.

And the Italian had a disagreement last month with Patey, when he suggested that he was working in a "hostile environment" under the new board, only for the chairman to later insist the comments had been misinterpreted.

But Patey insisted: "We are dependent on the benefaction of our owner and he has no unlimited funds.

"The dream scenario is we'd be in the Championship with new investors and new owners, but there are a lot of other things that could happen too, and I do stress the money situation is extremely tight."

Despite the chairman's comments, Di Canio remains optimistic that he will be able to do some business this month, but has cautioned supporters against getting carried away by their prospects for the rest of the season.

"There is not any insurance even if we spend £20m that we can go up.

"I can hope, I'm waiting, but at the moment I don't count about help from the board. If it comes it would be fantastic for everybody," he said.